Three killed as Iran unrest shows no signs of subsiding 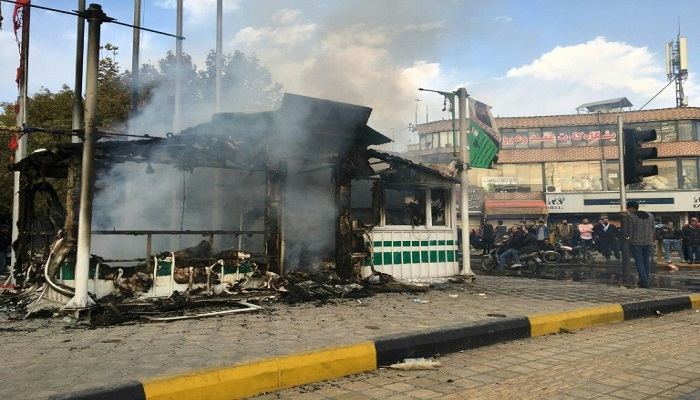 Three security personnel have been killed by "rioters" in Iran, the latest deaths in protests that showed no sign of subsiding Tuesday despite a wave of arrests and an internet shutdown.

The deaths take to at least five the number of people confirmed to have been killed in the nationwide demonstrations that erupted on Friday against a shock decision to impose petrol price hikes.

The situation on the streets remains unclear largely due to the government-imposed internet outage which has entered a third day.

On Tuesday morning, AFP journalists saw two petrol stations in central Tehran gutted by fire and damage to other infrastructure including a police station and pedestrian overpass.

But they were prevented from filming as hundreds of riot police stood guard at entrances to major squares in the Iranian capital with armoured vehicles and water cannon.

When the demonstrations broke out on Friday, drivers stopped their vehicles on major thoroughfares in Tehran to block traffic.

They soon turned violent and spread to more than 20 cities and towns across Iran, with banks, petrol stations and other public property set alight and shops looted.

The demonstrations erupted after it was announced the price of petrol would be raised by 50 percent for the first 60 litres purchased over a month and 200 percent for any extra fuel after that.

Iran's economy has been battered since May last year when President Donald Trump unilaterally withdrew the US from a 2015 nuclear agreement and reimposed crippling sanctions.

Footage of masked young men clashing with security forces has been broadcast on state television, which rarely shows any signs of dissent.

In a new video aired Monday night, a man can be seen firing what appears to be an assault rifle as others hurl stones apparently at security forces in the western city of Andimeshk.

One of the three was identified as Morteza Ebrahimi, a commander of the Islamic Revolutionary Guard Corps and father of a newborn child, according to Fars.

The other two were Majid Sheikhi, 22, and Mostafa Rezaie, 33. Both served in the Basij militia, a volunteer force loyal to the establishment.

The overall toll -- which also includes a civilian and policeman -- is expected to rise, with unofficial reports saying that at least six other people have been killed.

It is the worst violence since at least 25 lives were lost in protests over economic hardship that started in Iran's second city Mashhad in December 2017 before spreading to other urban centres.

In response to the violence, the authorities say they have arrested more than 200 people.

The internet outage has stemmed the flow of videos shared on social media of protests or associated acts of violence.

Iran announced the decision to impose petrol price hikes and rationing at midnight Thursday-Friday, saying the move was aimed at helping the needy with cash handouts.

The plan agreed by a council made up of the president, parliament speaker and judiciary chief comes at a sensitive time ahead of February parliamentary elections

It has received the public support of Iran's supreme leader Ayatollah Ali Khamenei.

President Hassan Rouhani has defended the price hike saying the proceeds will be used to make welfare payments to 60 million Iranians.

The United States has condemned Iran for using "lethal force".

Iran hit back at its arch-enemy on Monday, slamming US Secretary of State Mike Pompeo after he tweeted "the United States is with you" in response to the demonstrations.

Germany called for dialogue between the government and "legitimate" protesters while France reiterated its support for the right to peaceful demonstration and voiced regret over the deaths.

Judiciary spokesman Gholamhossein Esmaili warned on Tuesday that the authorities would deal firmly with those who endanger security and carry out arson attacks.

In televised remarks, he also called on citizens to inform on "seditionists" who have committed acts of violence.