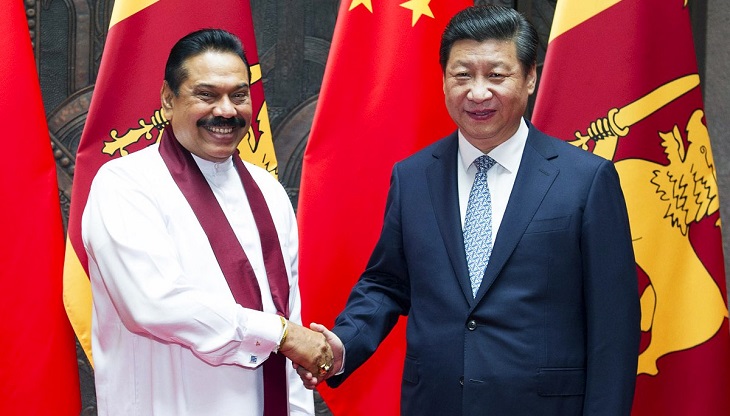 The unfinished, purple-headed Lotus Tower soars uselessly into the Colombo sky, mired in corruption allegations -- a project typical of China's misadventures in Sri Lanka under a political dynasty that has just returned to power.

With the Rajapaksas clan now back, Beijing will likely be too, experts say.

On Monday Gotabaya Rajapaksa was sworn in as president, almost five years after his brother Mahinda's decade in charge ended in ignominy in 2015 as allegations of corruption and nepotism surfaced.

But many of the projects have proven to be white elephants, including a $210-million airport that has no commercial flights.

In 2016 troops had to shoo away deer, wild buffalo and elephants from the site.

Some of the money was allocated under Beijing's gargantuan Belt and Road Initiative (BRI) spanning Asia and beyond and aimed at facilitating trade.

Western countries worry that the BRI conceals China's efforts to expand its influence by loaning nations money only to acquire the assets when they cannot repay.

Hambantota port in southern Sri Lanka, situated on a key maritime trading route between Europe and Asia, is for critics a prime example.

In December 2017, Sri Lanka was forced to hand the port over to China on a 99-year lease after failing to service a $1.4-billion debt from Beijing to build it.

For the Rajapaksas, who together spearheaded the brutal crushing of Tamil separatists in 2009 -- with allegedly 40,000 civilians killed -- China also came in handy in other ways.

"What the Chinese offered to a regime that was being chastised for its human rights record... was international diplomatic protection as well the funds for development," analyst Paikiasothy Saravanamuttu told AFP.

Many of the building projects, like the 350-metre (1,155-feet) Lotus Tower, have been accused of facilitating corruption.

One of the two Chinese companies building the huge flower-shaped structure vanished with an advance of two billion rupees ($18 million), according to outgoing president Maithripala Sirisena.

Reputedly South Asia's tallest free-standing communications tower, it is set to be opened soon -- but just for people to enjoy the view, since it's not functioning yet.

The Rajapaksas say they had to borrow from China because credit was hard to come by elsewhere, and Akhil Bery from think-tank Eurasia said that there is some truth to this.

Nor was it "all bad", Bery told AFP, with the Chinese-funded Colombo International Container Terminal "already profitable".

After Mahinda Rajapaksa lost power in 2015, successive governments attempted to fix some of the projects and bring in capital from elsewhere.

An agreement with China to build a vast commercial district on reclaimed land off Colombo port was renegotiated, and India is in talks about reviving the moribund airport.

But these may now be in danger again with the Rajapaksas back in power.

Financing from elsewhere, such as the World Bank and the Asian Development Bank, is available.

"(But) China is Sri Lanka's largest investor and creditor, meaning that a close relationship with China is inevitable," Bery said.

Still, said Jeff Smith, research fellow at US think-tank the Heritage Foundation, Gotabaya may have "learned some lessons from his brother's tenure".

This includes "that he recognises the downside risks... of excessive dependency on China," Smith told AFP.