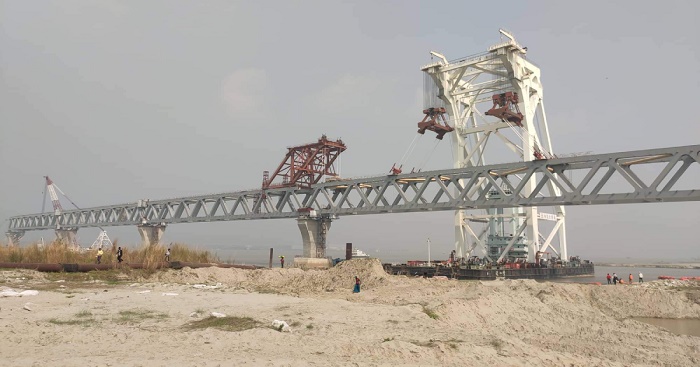 The 16th span of the Padma Bridge was installed between piers no 16 and 17 on Tuesday, making 2.5 km of the under-construction 6.15km mega structure visible.

Earlier in the morning, the span was brought to piers by a floating crane from the Kumarbhog construction yard of Louhajang upazila in Munshiganj, project engineers informed.

The 16th span was installed nearly one month after installation of 15th span at Zajira point on October 22 this year.

The 15th span was also installed after a four-month break due to inclement weather. The 14th span of the bridge was installed on June 29, 2019.

Project officials are hopeful that they will be able to install two more spans this month as the navigability problem has been overcome.

“Installation of the previous span faced delay due to navigability problem. However, the next spans won’t face such delay as dredging work has been done in such way that carrying other spans will be easier,” project director Shafiqul Islam said.

The construction work of the long-cherished Padma Bridge Project began in December, 2015. The first span of the bridge was installed on September 30, 2017.

The length of the steel structure double-deck Padma Bridge is 6.15 km. The trains will run through the lower deck while the road will be on the upper level of the bridge.

Once the construction of the Padma Bridge is completed, the capital Dhaka will be directly connected with 21 southern districts through road and railways.