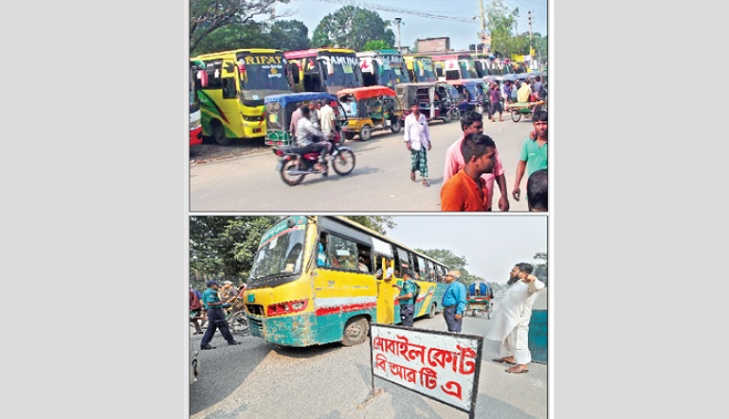 Top: A number of vehicles stand idle at Bhuanpur Bus Terminal in Tangail district as the transport workers go on strike in the district on Monday, demanding amendment to the new Road Transport Act (RTA). Bottom: A mobile court of Bangladesh Road Transport Authority (BRTA) halts a public bus on Manik Mia Avenue in the capital on Monday for checking its documents. The court is conducting the drive to enforce the new RTA in the country. – sun photo

Amid anarchic and chaotic situation on the roads, magistrate-led BRTA mobile courts enforced a new tough law against vehicles without valid papers required to legally operate in a bid to restore discipline in the transportation sector.

A large number of transport owners and drivers stayed off the roads on Monday to thwart the government’s bid to enforce disciple on the roads under the new Road Transport (RTA) law which allows the maximum death penalty for the drivers of a killer vehicle.

After delays, the government announced the enforcement of the law despite protests from Sunday binning protestors demand to amend some of the clauses of the law.

The law saw a rush for getting valid driving licences and papers for vehicles following awareness programmes and the government’s firmness on enforcing steps to ensure discipline on the roads.

Thousands of commuters in at least 11 divisions of the country were faced with difficulties as they went on a wildcat strike snapping links with the capital Dhaka.

Police said, drivers of many unfit and authorized vehicles including passenger buses refrained from running on the city-street fearing tough penalties under the new RTA.

Abdul Khaleq, a resident of Dhalpur area alleged that he along with his wife had been waiting at Golapbagh Biswa road for about an hour for a transport.

“Only a handful of passenger buses are now plying on this route with excessive passengers. I along with my wife hardly tried to get into a bus but failed,” he said.

Eight mobile courts in Dhaka and two in the southeastern port city of Chattogram were out on the streets on Monday to ensure that people the new rules and regulations were followed..

Masudur Rahman said he visited Kakoli intersection to supervise the mobile court’s activities. The government on October 22 announced that the law would be implemented from November 1.

The transport act was approved by the president on October 8 last year. It was passed in parliament on September 19 the same year.

They are staging protests demanding amendments in some major sections of the act, including the death penalty for deaths in road accidents.

Kazi Md Nurul Islam Bebi, president of Khulna Motor Workers’ Union, said: “Transport workers respect the new law, but it was affect ting them directly which is unacceptable to them.”

Bus drivers and workers, among other transport workers, were seen playing cricket at the green of Sonadanga bus stand on Monday morning.

Transport workers stopped running buses on various route in Rajshahi, while buses on Rajshahi to Chapainawabganj, Naogaon and Natore routes stayed off the roads.