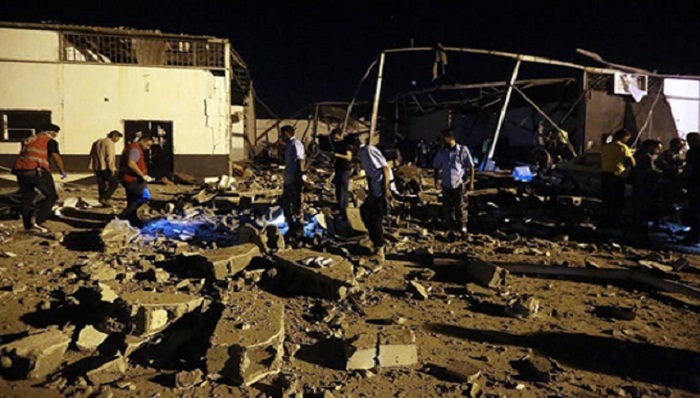 Seven people, including a Bangladeshi national, were killed in an airstrike on a biscuit factory in Libya’s capital Tripoli on Monday, said Bangladesh Embassy there.

Talking to UNB, ASM Ashraful Islam, labour counsellor of Bangladesh Embassy in Tripoli, said one of the victims is Bangladesh national.

He said he personally visited and saw the bodies. “Five victims are African nationals,” he said, adding that 15 more Bangladesh nationals were injured in the airstrike.

Earlier, The Associated Press reported that five Bangladeshis were among the dead.

Malek Merset, a spokesman with the ministry, told the AP that the dead included five workers from Bangladesh and two Libyan nationals.

The airstrike also wounded at least 33 workers, mostly from Niger and Bangladesh, who were taken to nearby hospitals for urgent treatment, Merset said.

Tripoli has been the scene of fighting since April between the self-styled Libyan National Army, led by Gen. Khalifa Hifter, and an array of militias loosely allied with the UN-supported but weak government which holds the capital.

The Tripoli-based health ministry said the airstrike took place in the capital’s Wadi el-Rabie neighborhood, south of the city center where fighting has been raging for months.

Footage shared online showed wounded people with bandages and blood on their legs on stretchers before being taken by ambulances to hospitals.

Fighting for Tripoli has stalled in recent months, with both sides dug in and shelling one another along the city’s southern reaches. The months of combat have killed hundreds of people and displaced thousands.