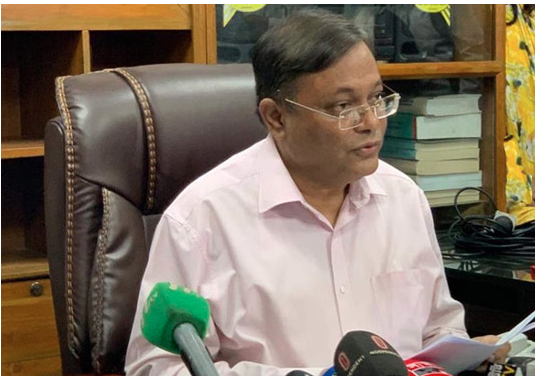 Information minister Dr Hasan Mahmud termed as ‘hollow” a BNP letter sent to Prime Minister Sheikh Hasina over her recent India tour, saying it reflected the party’s attempt to mislead the people or deliberate lapses on their part in comprehending issues.

Talking to newsman at his Secretariat office, the information minister said BNP claimed the deals inked during the Prime Minister’s New Delhi tour were not disclosed to the people and President M Abdul Hamid, dubbing such claim a mischievous mix-up to confuse the people.

“Honourable Prime Minister called on the President and informed him about the tour - also spoke elaborately to the media about the deals and also conveyed everything to the parliament,” Hasan said.

Blaming BNP for failing to understand that no new agreement was signed with India other than a deal on opening the branch of an Indian bank in Dhaka.

“I became astonished that the BNP leaders misconstrued differences between Memorandum of Understanding (Mou) and agreement . . . the letter of BNP is totally gassy and it is nothing but their (BNP) political stunt,” he said.

Turning down BNP leaders’ criticism over the treaties with India as an exaggeration to get political divided, Hasan said BNP is accustomed to ride on anti-Indian politics and deliver anti-Indian statements to confuse the people.

The information minister said BNP chief Begum Khaleda Zia did seven agreements during her regime with India. But she never informed the details about her agreements to the President and the people.

“Bangladesh didn’t give water to India . But, BNP leaders are spreading falsehood over the water issue of the Feni River. India was using drinking water from the Feni River earlier, which is only 0.5 percent. Now the Bangladesh government has brought it under a framework,” he added.

“We will export excess bottled of LPG to the Tripura State of India. . . India is giving a grant to set 20 radars for our Coast Guard in the Bay of Bengal. Those will be the assets of the Coast Guard and they will conduct the radars,” he said.

“Besides, the agreements of using Chattogram Sea Port and Mongla Sea Port were signed earlier. We will be economically benefited if India uses our Chattogram and Mongla ports. We will be able to earn foreign currencies,” he added.

The information minister said this is their first letter to the premier after the arrest of BNP chief Begum Khaleda Zia. “But, there was not a single word about Begum Zia or her release issue in the letter. Did they (BNP) want release of Begum Zia?,” Hasan, also the publicity and publication secretary of Awami League, said.

Castigating BNP for sending the letter, the information minister said the letter has exposed the BNP’s unwillingness to seek release of Begum Zia and also their desire to cherish the anti-Indian sentiments. He urged the BNP leaders not to create confusion among the common people.

Hasan Mahmud today said the Prime Minister does not strike any agreement at the cost of country’s interest. “We have triumphed over the maritime boundary cases against India and Myanmar and solved the enclave problem under the leadership of Prime Minister Sheikh Hasina”, he said.