Protesting students stopped by cops during march to parliament 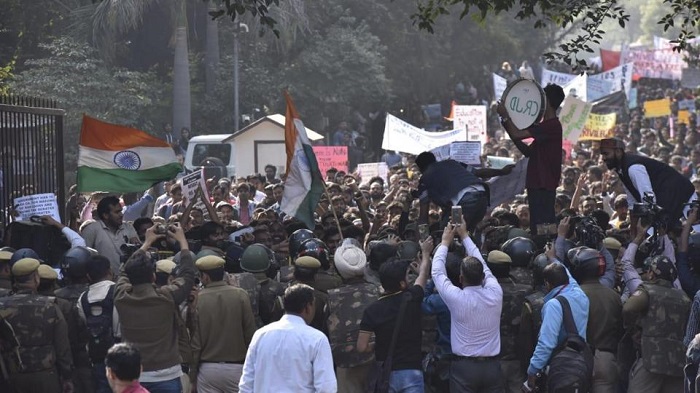 Hundreds of students of the Jawahar Lal Nehru University in Delhi were stopped by police Monday afternoon near the campus soon after they began marching towards parliament amid tight security to demand a "complete rollback" of the recent hostel fee hike.

With posters in hands, hundreds of students chanted anti-fee hike slogans as they began their march. Over 1,200 cops have been deployed outside the campus. Large gatherings are banned outside the parliament.

The Jawahar Lal Nehru University Students Union led the march to the parliament days after the university's top decision making body had announced a "major rollback" in the recent hostel fee hike amid massive protests. "JNU Executive Committee announces major roll-back in the hostel fee and other stipulations. Also proposes a scheme for economic assistance to the EWS students. Time to get back to classes," Education Secretary R Subrahmanyam had tweeted last week.

The students have been protesting against the fee hike for more than 10 days after a draft hostel manual was issued which includes provisions including hostel fee hike, dress code and hostel timings. Last week, hundreds of protesting students had clashed with the police on the university's convocation day. Policemen in riot gear, completely outnumbered by the students, were seen jostling with the crowd.

Today, the students' body said that the march to parliament is a "way to appeal to lawmakers to fight on our behalf inside the floor of the house".

The Education Ministry also formed a three-member panel this morning to recommend measures for restoration of normal functioning of the central university.

"With a view to restore the normal functioning of JNU through dialogue with all stakeholders and to advise the university administration for resolution of contentious issues, the government has appointed a three-member high power committee," HRD Secretary R Subrahmanyam was quoted as saying by news agency PTI.

The committee "will initiate dialogue with the students and varsity administration immediately and submit recommendations on actions to be taken," he added. "The UGC will provide required support for functioning of the committee, Mr Subrahmanyam said.

On Sunday, JNU Vice-chancellor M Jagadesh Kumar had urged the protesting students to return to their classes. In a video message released on the varsity's website, he said he has been getting e-mails from worried parents and students about the situation in the university which is affecting academic activities.

Similarly, the room rent for double seater rooms is Rs. 300 per month for all while it is Rs. 150 for students from the BPL category.

The students body had dismissed the rollback last week, calling it an "eyewash".