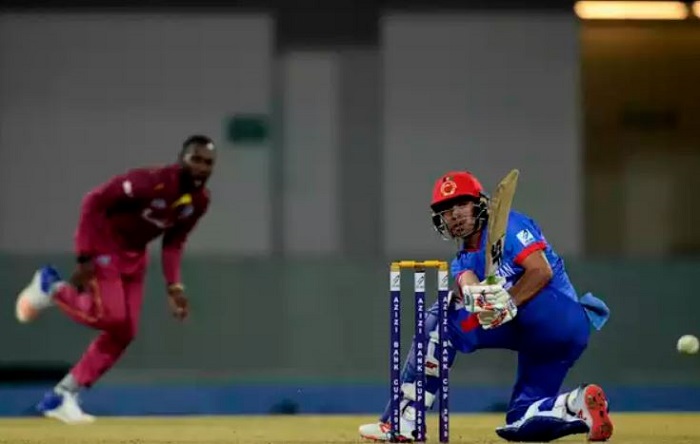 Rahmanullah Gurbaz's career-best knock of 79 formed the core of Afghanistan's come-from-behind series win as they handed West Indies a 29-run defeat in the third and final T20I in Lucknow on Sunday.

The wicketkeeper-batsman smacked five sixes and half a dozen boundaries in his 52-ball effort that gave Afghanistan a healthy 156/8 - their best score of the series - before a collective, disciplined effort from the bowlers restricted the visitors to just 127/7 in reply despite Shai Hope's uncharacteristically breezy half-century.

On the same track at the Ekana Stadium where West Indies had faltered to get 147 just last night, Afghanistan had already raised the stakes by setting them a target of 157 this time.

To make matters worse, Mujeeb-ur-Rahman shattered the stumps of Lendl Simmons on the first ball of the third over with a googly, shortly after which Naveen-ul-Haq got the better of Brandon King again, with a delivery exactly similar to the off-cutter he got him out with in Game 2, as West Indies slipped to 16 for 2 in the fourth over.

Evin Lewis, with his three boundaries, drove West Indies forward and put on a brief partnership with Hope that steadied the chase before Karim Janat trapped him lbw on 24 off 23. Hope upped the ante from there on, but West Indies had already fallen behind the eight ball.

Dropped on 11, he survived a run out chance too in his 43-ball fifty en route which he added 38 runs with Shimron Hetmyer and another 32 with Kieron Pollard. However, as the two more destructive batsmen failed to get going, West Indies' asking rate shot up to 10 and beyond in no time. The pair made 11 each, leaving half-centurion Hope and the tail with a tough ask of 45 required in under three overs.

Well set, Hope decided to take matters into his own hands but muscled one straight to Asghar Afghan at extra cover who reverse-cupped the easy catch to all but seal the fate of the game. West Indies. from 118/6 at the start of their penultimate over, crawled to 127/7 only to delay the inevitable.

Earlier in the day, Afghanistan retained their faith in the winning combination and elected to bat first in the series decider, backing their strengths to defend any total. However, Sheldon Cottrell inflicted early damage with two wickets in quick succession in his opening spell to send back Hazratullah Zazai (0) and, last night's hero, Karim Janat (2) by the end of the third over.

Gurbaz hit back on behalf of the home team, striking aggressively despite the damage at the other end. Of the 32 Afghanistan managed in the six overs of powerplay, Gurbaz had accounted for 26 that included two hits to the fence and two over it. Pollard introduced Khary Pierre into the attack straight after the powerplay, and Gurbaz, after a brace off the first ball, launched the left-arm spinner deep into the stands at long-on, making his intentions rather clear.

The only time Gurbaz ever put a foot wrong was when he sold Ibrahimm Zadran down the river, retracting his steps after calling for a single resulting in a tame run out of the latter against the run of play, in the eighth over.

Former skipper Asghar Afghan played second fiddle for the first 40 runs of his 50-run partnership with Gurbaz, before deciding to switch gears. It almost backfired as he tried to heave one over deep mid-wicket fence and nearly popped a catch to the fielder, only for Brandon King to shell a regulation catch on the ropes. Afghan then brought up the half-century of the fourth wicket partnership as he muscled a poor full toss from Keemo Paul on the leg-stump over long leg fence. However, Paul and King both redeemed themselves in the same over, combining again to put an end to Afghan's fireworks and the threatening partnership.

Gurbaz, unaffected yet again, fetched two sixes and as many boundaries more before Pollard got to him with a slower one. Batting on 79 - already having surpassed his previous best in T20Is - Gurbaz attempted to upper cut the short ball outside off, only to pop a sitter to the man at sweeper cover.

Najibullah first, and then Nabi took over the role of aggressors once Gurbaz departed, and even without scoring a lot, ensured that Afghanistan ended up with a total healthy enough for it's strong arm to defend comfortably.