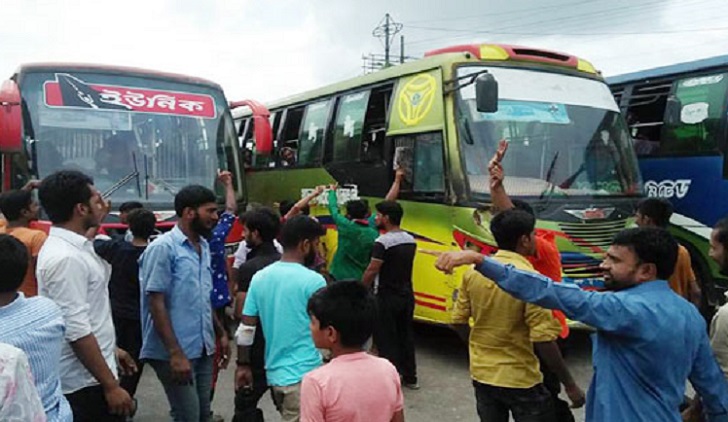 Scattered strikes by transport owners and workers were enforced in some districts, while some kept their vehicles off the streets in the in a bid to force the government to amend the new Road Transport Act (RTA).

They are staging protests demanding amendments in some major sections of the act, including the death penalty for deaths in road accidents.

If their demands were not met, they were likely to go for tougher programmes, including countrywide transport strikes, sources said.

Khandaker Enayet Ullah, secretary general of Bangladesh Road Transport Owners’ Association (BRTOA), said: “We are asking the workers to follow the new law. But if the government enforces the law with maximum fines, it may create problems.”

Bangladesh Road Transport Workers Federation (BRTWF) General Secretary Osman Ali said “Transport workers have stopped operating their vehicles in fear of death penalty or life imprisonment. They are doing this without consulting us.”

“We are going to hold a two-day central committee meeting from November 21 to take decision regarding the next course of action” he added.

In the meeting they will take decision about what to do in protest against the new law. A new programme may be announced in the meeting to press home their demand, sources said.

The leaders of workers hinted that countrywide transport strike might come within this week protesting the law, sources said.

In the face of a nationwide student movement demanding safe roads, the government passed the 'Road Transport Bill-2018’ on 19 September 2018.

But under the pressure of the transport owners and workers, the law could not be implemented immediately.

After more than a year of enactment, the law goes into effect on November 1.

However, the law was not implemented due to lack of adequate preparation by the traffic police.

The concerned departments of the government are campaigning extensively to implement the law.

DMP DC Jaydeb Chaudhury (Traffic Division, South), said: “Now we are conducting campaign to make people aware about the new law. We haven’t started filing case or fine according to the new law.”

“Maybe from tomorrow (Monday) we will start filling case under the new law,” he added.