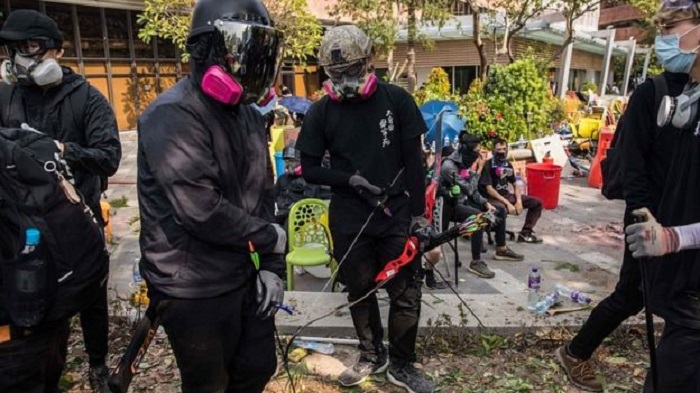 Police have besieged a university campus in Hong Kong occupied by protesters who have been fighting back with arrows and petrol bombs.

Officers have warned that they could use live ammunition if protesters do not stop attacking them using such weapons.

A media liaison officer was earlier wounded in the leg with an arrow near the Polytechnic University (PolyU).

Months of anti-government protests have caused turmoil in the city.

The latest violence is, however, some of the worst the semi-autonomous Chinese territory has seen since the movement began. The police have become targets for radical demonstrators, who accuse them of excessive force.

Police have so far been responding to violence around the PolyU campus mostly with tear gas and water cannon.

Those occupying the university have been told to leave immediately. Dozens have reportedly been arrested but many hundreds remain inside. There are fears of bloodshed should police move in to quell what they have now declared a riot.

"I hereby warn rioters not to use petrol bombs, arrows, cars or any deadly weapons to attack police officers," police spokesman Louis Lau said in a statement broadcast via Facebook.

"If they continue such dangerous actions, we would have no choice but to use the minimum force necessary, including live rounds, to fire back."

Earlier on Sunday police fired a live round in response to what they said was a car hurtling towards officers near the university.

The protests in Hong Kong, which began in June, were triggered by a now-withdrawn plan to allow extradition to mainland China but have since expanded into wider demands for greater democracy and for investigations into the actions of the police.

The government recently confirmed the city had entered its first recession for a decade.

In recent days, Hong Kong's university campuses have been the scenes of pitched battles between police and demonstrators.

On Sunday, riot police fired tear gas and used water cannon against protesters at the PolyU, who launched bricks and petrol bombs at them. Protesters took cover behind umbrellas on a footbridge and set light to debris there, causing a huge fire.

The blaze triggered a number of small explosions, witnesses said, and fire crews eventually moved in to douse the flames.

There have also been heavy clashes on a bridge above the Cross Harbour tunnel, which links Kowloon and Hong Kong island.

A police truck on the bridge was set on fire and forced to retreat.

Pro-democracy lawmakers are trying to enter the campus to communicate with those inside, the South China Morning Post newspaper reports.

A reporter with the Reuters news agency at the campus says there are "grave fears of a bloody showdown".

In a statement, the university urged those occupying the campus to leave.

"Universities are venues for advancing knowledge and nurturing talents. Universities are not battlegrounds for political disputes and should not be drawn into violent confrontations," it read.

Police said the wounded officer had been on duty near the PolyU when he was hit by the arrow on Sunday afternoon.

Hong Kong - a British colony until 1997 - is part of China under a model known as "one country, two systems".

Under this model, Hong Kong has a high degree of autonomy and people have freedoms unseen in mainland China.

The protests started in June after the government planned to pass a bill that would allow suspects to be extradited to mainland China.

Many feared this bill would undermine the city's freedoms and judicial independence.

The bill was eventually withdrawn but the protests continued, having evolved into a broader revolt against the police, and the way Hong Kong is administered by Beijing.