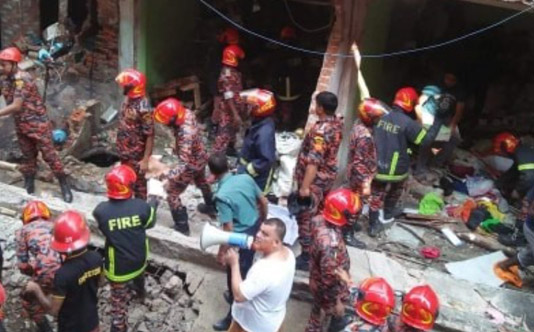 Chattogram City Corporation and Chattogram District Administration will bear all treatment costs of those who received injuries in a gas pipeline explosion in a house in city’s Patharghata area this morning.

The city corporation will form a committee soon to investigate the matter, Mayor Nasir said. The CCC and DC offices will jointly provide Taka 20,000 to the families of the deceased immediately, the source said.

During his visit City Mayor asked the local councilor and the fire brigade services men to extend all possible helps to the blast victims’ families.

Nasir expressed deep shock over the unwanted deaths and expressed sympathy to the members of the bereaved families.

Meanwhile, City Mayor also visited the injured persons at CMC Hospital and consoled them and assured of better treatment.

He said TK one lakh will be given later by CCC to each blast members who passed away.

Deputy Commissioner of Chattogram Mohammad Ilias Hossain told BSS that every family member of the gas dead victims of the Pathaergatha gas explosion will get Tk. 20 thousand each for funeral expenses. He disclosed it while visiting the accident spot in the morning.

DC said it is most essential to give importance of security before constructing any building and said most of the building owner did not comply with the approved plan of the CDA.

At least seven people including a child were killed and 15 others injured in an alleged gas pipe line explosion in a house in city’s Patharghata area this morning.