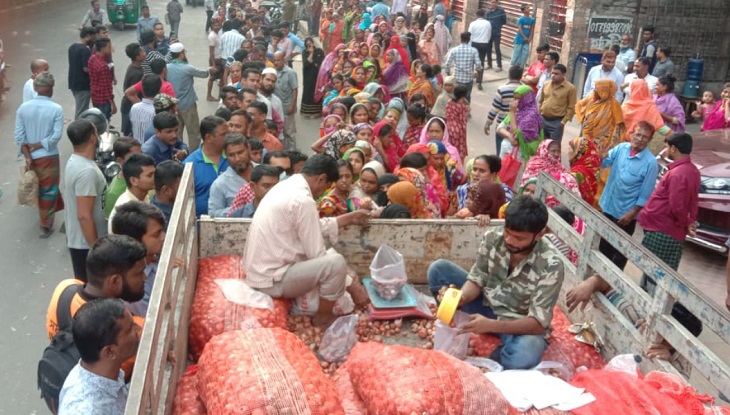 TCB has started selling onion imported from Myanmar at Tk 45 per kg in front of its head office in the city’s Karwan Bazar area on Sunday, Nov 17, 2019. Photo: UNB

Amid the overheated onion market, state-owned Trading Corporation of Bangladesh (TCB) has started selling onion imported from Myanmar at Tk 45 per kg in front of its head office in the city’s Karwan Bazar area on Sunday.

Talking to UNB, Adib, a TCB dealer, started onion sale around 11 am and they will continue it until their truckload is finished.

During a visit to the spot, the UNB correspondent saw a long queue of buyers, especially lower- and middle-class people, centering the truck in the area.

He, however, said one person is allowed to purchase only one kg of onion from the truck.

Talking to Munir Hossain, a consumer standing in the queue, said, “We’re very happy to see that the TCB is selling onion at Tk 45 and we hope the price will come down soon.”

The onion price shot up to Tk 260 per kg in different parts of the country, including the capital, on Saturday.

Consumers alleged that unscrupulous businessmen continued to raise the onion price through syndications as the ‘government has no control over the market’.

However, traders blamed the supply shortage for the skyrocketing price of the cooking ingredient.

On September 29, the Indian government banned onion export with immediate effect till further order for what it says improving domestic availability, which triggered the onion price hike.

The government on Friday said onion is being flown in from Turkey, Egypt, Afghanistan and the UAE on an emergency basis to keep the local market stable.