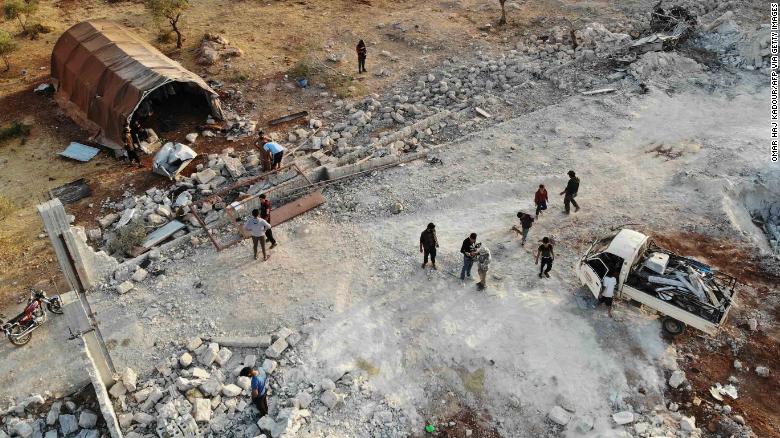 Iraq intelligence agents tracked ISIS leader Abu Bakr al-Baghdadi for years before getting the break they say was critical to cornering him.

That break was the arrest in May of one of al-Baghdadi's brothers-in-law, Mohammed Ali Sajet al-Zubaaei, who joined ISIS in 2015 and had become one of the leader's trusted guides.

It was a culmination of Iraq's tactic of following al-Baghdadi by looking for those closest to him, said Lt. Gen. Saad al Allaq, the head of Iraq's military intelligence directorate.

"We were observing the movements of al-Baghdadi in indirect ways through his family," al Allaq said in a rare interview. "By doing that, it gives us some sort of secrecy and we gave al-Baghdadi an impression that we were not monitoring his movements."

Al-Zubaaei had helped al-Baghdadi avoid the authorities when he traveled. After he himself was captured by the Iraqis on the outskirts of Baghdad in May 2019, he provided crucial information, Iraqi intelligence officers told CNN.

He led security forces to a tunnel in the desert near Qaim in western Iraq close to the Syrian border, where they discovered personal belongings of al-Baghdadi, as well as maps and handwritten notes of locations.

Al-Zubaaei also suggested that the ISIS chief could be in Idlib, Syria, the agents said.

Iraqi security forces later were able to infiltrate an al-Baghdadi smuggling network in Syria, which helped to track him, they said.

Iraq shared the information with US-led coalition forces in Iraq and Syria as part of their regular briefings and the CIA and other US units then took the lead, working with the mainly Kurdish Syrian Democratic Forces, to find him.

Al-Baghdadi died along with two children he had taken with him in a US raid in October on the outskirts of Barisha, a village near Idlib.

News that al-Baghdadi was in Idlib seemed odd to many analysts, CNN's Clarissa Ward reported last month. Idlib is under the control of Hayat Tahrir a Sham, a rebel group with ties to al Qaeda. While the militant jihadist groups have plenty in common ideologically, for years, ISIS and al Qaeda and its affiliates have been locked in bitter fighting in Syria. It would seem an unlikely hiding place for Baghdadi, particularly in a village just 3 miles from the Turkish border.

Al Allaq said much of ISIS leadership had fled to northern Syria to be closer to their sources of funding. He added that continuous military operations around the Euphrates River in the Iraq-Syria border region had unnerved al-Baghdadi.

"He traveled to the west to be far from the military operations and battlegrounds," he said.

Iraq had been chasing the elusive ISIS leader since he proclaimed the so-called caliphate from the Grand Mosque in Mosul in July 2014.

Spies were sent to the city and at least one time the Iraqis sealed off an area believing they could trap him. At that time, he changed his location more than 10 times a day, al Allaq said.

The details of the mission codenamed Operation Falcon Eye were collated in a presentation shown to CNN by Iraqi military intelligence officers.

They said al-Baghdadi was in Iraq through the height of the ISIS movement, before Iraqi military operations in and around Mosul began to drive the rebels out.

Al-Baghdadi fled through ISIS-controlled territory into Syria in August 2017. Iraqi agents continued to track him as he made his way north, following the route of the Euphrates towards Deir Ezzor, where he was in February 2018, officials said.

A key part was played in this time by the father of al-Baghdadi's third wife, who became known as the "Ghost of the Desert" for his ability to move ISIS groups undetected between Mosul in Iraq and Raqqa in Syria, CNN was told.

In February 2018, Iraq says it scored another breakthrough with the arrest of Mohammed al-Dulaimi, known as Abu Ibrahim. He was the son of a former deputy of al-Baghdadi who was one of his key couriers of ISIS's coded messages at the time. This arrest generated more information about al-Baghdadi's guide, al-Zubaaei, and was a significant step leading to his capture, al Allaq said.

Al-Baghdadi left his hideout in Deir Ezzor after al-Dulaimi's arrest, officials said. Iraq shared its information with US-led coalition forces and the Syrian Democratic Forces in a renewed push to track the ISIS chief down.

Iraq's intelligence chiefs said al-Baghdadi then kept on the move in the Syrian desert between Palmyra and Homs until at least March of this year, before he headed north to where he was cornered last month and killed himself.