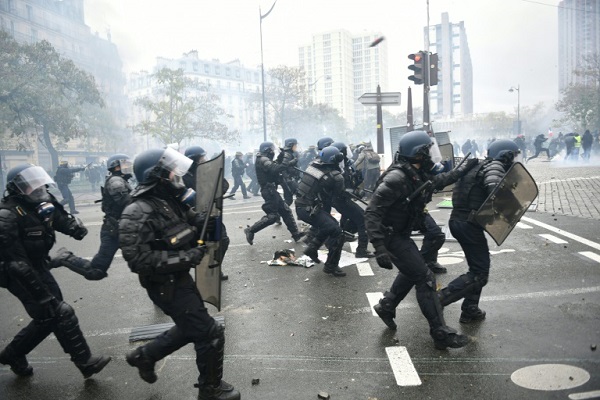 Clashes broke out in other French cities as activists rallied to prove their movement is still a force a year after the first giant protest on November 17, 2018, which drew 282,000 people.

Numbers attending the protests and levels of violence have sharply diminished from the height of the movement, which began on the back of frustration Macron was failing to address the needs of ordinary French people.

But Saturday's protests -- which demonstrators called "Act 53" of their weekly gatherings -- marked the first serious clashes for months in central Paris between security forces and demonstrators.

The interior ministry put the number of demonstrators at 28,600 nationwide but the organisers said nearly 40,000 people had rallied.

A major shopping centre in the area closed its doors after dozens of protesters threw stones at the windows of a neighbouring hotel. Several demonstrators and a freelance journalist were injured.

Earlier in the afternoon, Paris police chief Didier Lallement had banned the Place d'Italie demonstration, condemning the "damage and the systematic attacks against the security forces and the fire brigade".

"It's pathetic that the demonstration was banned," said Catherine Van Puymbroeck, 49. "The state has provoked this anger."

Police also fired tear gas in the Les Halles area, near the famed Pompidou Centre museum, to break up demonstrations.

The yellow vests want the actions on Saturday -- their usual day of protest -- and also Sunday, the anniversary day, to remind Macron they have not vanished from the scene.

"We're here even if Macron doesn't like it," demonstrators chanted as they arrived on the outskirts of Paris Saturday, with others singing "Happy Birthday".

Police were deployed in numbers, especially along the Champs-Elysees, which was again closed off to demonstrators following the ransacking of shops that followed a protest last March.

France has a long tradition of violent protest, but the ferocity of last winter's demonstrations and allegations of police brutality shocked the country.

A poll by the Elabe institute published Wednesday said 55 percent of French people support or have sympathy for the yellow vests, although 63 percent said they do not want the protests to begin in earnest again.

The most prominent figures in the movement, which has explicitly shunned any formal leadership structure, acknowledge the declining numbers but say the authorities' response has not been sufficient.

"We shouldn't still need to be on the street one year on," said Priscillia Ludosky, an entrepreneur whose online petition against high fuel prices helped kick off the movement, told the Regards news site.

The yellow vests -- named for the glow-in-the-dark waistcoats all French drivers must carry in their cars -- posed the biggest challenge to Macron since he came to power in 2017 on the back of promises of sweeping change.

Initially taken aback by the size and intensity of the movement, Macron offered billions of euros in state aid and tax breaks -- and scrapped a planned fuel tax hike -- while embarking on a "Great National Debate" at town halls nationwide.

He has also tried to soften his sometimes abrasive style. Just weeks before the protests erupted, Macron told a 25-year-old man looking for a job in Paris that "if I crossed the street I'd find you one".

There were fewer reports of violence and large-scale protests outside Paris, but there were clashes at Bordeaux and Toulouse in the southwest, Nantes in the west and Lyon in the east.

"If the movement disappears, I worry that society will dehumanise and that would be the end of public services and the reign of money, the king," said Vanessa, a protester 47, in Nantes.

The next major street challenge to Macron, however, may not come from this weekend's protests but a strike called by unions on December 5 to rally against his planned pension reforms.