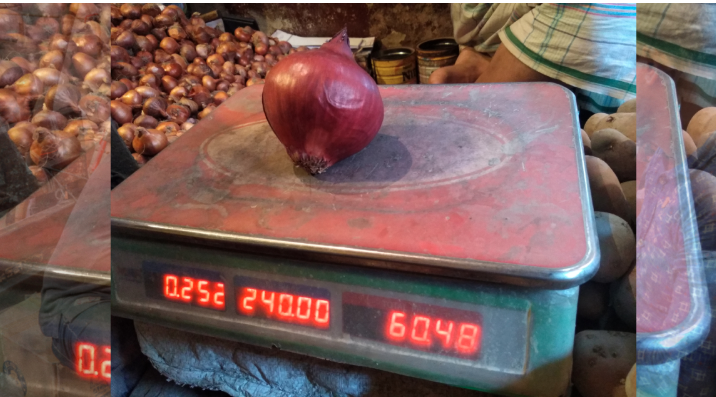 Onion price in the city's wholesale markets remained almost unchanged on Saturday compared to Friday’s amid fall in sale after the government’s announcement to import it from different countries on an emergency basis but it continued to soar in retail markets.

Talking to journalists, onion traders said the number of buyers have come down  while the price at wholesale markets remained unchanged after the government announced to import it from Egypt and other countries by cargo planes.

Mohammed Abu Bakar Siddique Ali, a wholesaler at Karwan Bazar, told UNB that he sold onion at Tk 220 to TK 230 per kg on Friday night but he has been selling it at Tk 220 per kg since Saturday morning.

Another wholesaler, Hridoy, at the same market said the wholesale price remained the same what it was on Friday. “The onion price will sharply fall once the imported one reaches the market,” he added.

Talking to UNB, some consumers said an artificial crisis has been created by syndicates of importers and various groups.

They also alleged that the price is soaring every day as the government has failed to take proper steps for monitoring the market in due time.

Ripon Mia, a shopkeeper in Bangshal area of Old Dhaka, told UNB on Saturday morning that they were selling local onion at Tk 260 per kg. “We’ve to buy onion at higher prices from wholesalers and we’ve no option but to sell it at exorbitant prices, too,” he added.

Humayun Kabir, another retailer at Kaptanbazar, said they were selling onion imported from Myanmar at Tk 240 per kg. “I don’t sell the local one due to the excessive prices.”

Al Amin, another trader in Moghbazar area, said they were selling the Myanmar variety at Tk 220-240 and the Egyptian one at Tk 180-200 per kg.

Md Shamsur Rahman, a wholesaler at Shymabazar in the capital, told UNB that the onion market has become volatile because the government did not take proper steps in due time.

“There’s a demand for around 30 lakh tonnes of onion in the country. Our local production is not enough to meet the demand.  So, we’ve to fulfill the demand with the import one. And the crisis has escalated when India banned onion export to Bangladesh,” he said.

“If the government had taken steps earlier monitoring the overall market then such a situation wouldn’t have created. It’s a matter of regret that rotten onions are being thrown into rivers. These onions had been hoarded in warehouses but detectives didn’t monitor it properly,” he added.

Amid the worsening situation, onions are being flown to Bangladesh from Turkey, Egypt, Afghanistan and the UAE on an emergency basis at the initiative of the Commerce Ministry to cool down the overheated market.

The TBC is importing onion from Turkey, while S Alam Group from Egypt and several other companies from Afghanistan and the UAE, according to a PID handout issued Friday.

"To minimise the problem, we’re importing onion through cargo planes. The onion-laden planes will land in the country either tomorrow or day after tomorrow," she said.