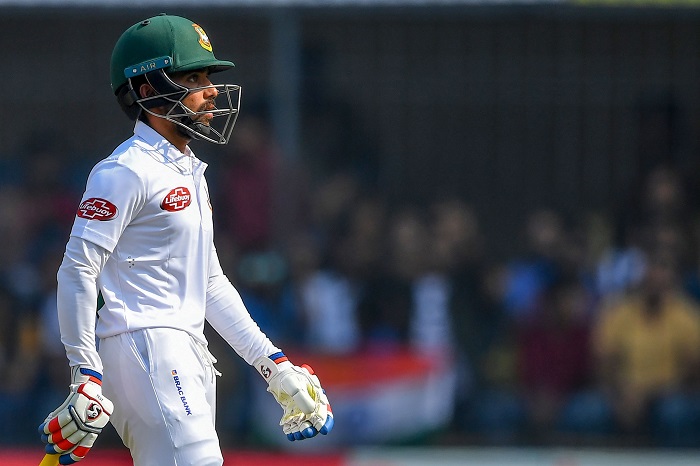 Bangladesh's Mominul Haque walks back to the pavilion after his dismissal during the third day of the first Test cricket match of a two-match series between India and Bangladesh at Holkar Cricket Stadium in Indore on November 16, 2019. –AFP

India's pacemen rattled the Bangladesh top-order Saturday after the hosts declared at 493 for six overnight in the first Test.

The tourists were reeling at 60 for four at lunch on day three, still trailing India by 283 runs in their second innings in Indore.

Mushfiqur Rahim, on nine, and Mahmudullah, on six, were at the crease after India declared with a lead of 343 runs. Bangladesh were bundled for 150 in their first innings.

Umesh Yadav drew first blood after cleaning up Imrul Kayes for six on a ball that curved into the left-hander and rattled the leg stump.

Ishant Sharma got Shadman Islam bowled for six in the next over. Mohammed Shami then trapped skipper Mominul Haque lbw for seven.

Mominul was given not out by the on-field umpire but India skipper Virat Kohli successfully reviewed the decision with replays suggesting the ball would have hit leg stump.

Shami, who took three wickets in the first innings, then sent Mohammad Mithun trudging back to the pavilion for 18.

He was denied a third when Rohit Sharma dropped an easy catch at second slip to give Mushfiqur life on four.

India rode on opener Mayank Agarwal's 243 to pulverise the Bangladesh bowlers and amass 407 runs on Friday.

Agarwal scored his second double century in four Tests and put on big partnerships including a 190-run fourth-wicket stand with Ajinkya Rahane, who made 86.

India are looking to take lead in the two-match series with the second Test -- the country's first-ever day-night game -- starting in Kolkata on November 22.