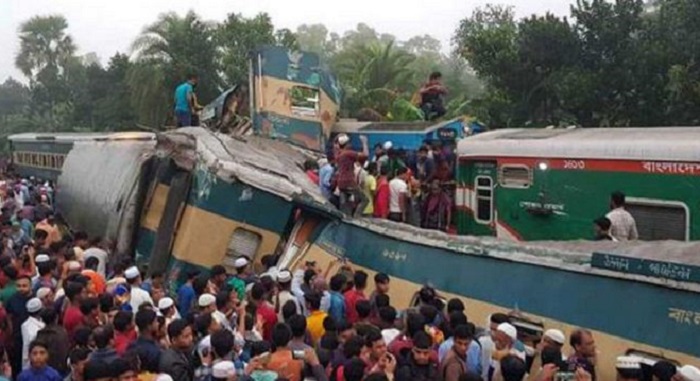 The driver, assistant driver and guard of express train Turna Nishitha have been found responsible for the fatal train accident on Tuesday in Brahmanbaria.

An investigation report revealed this saying the two drivers of the train were sleeping that caused the crash and claimed 16 lives.

Members of a divisional-level probe committee on Friday submitted their report to Md Shamsuzzaman, director general of Bangladesh Railway.

Dhaka-bound Turna Nishitha from Chattogram and Chattogram-bound Udayan Express from Sylhet collided at 3:00 am on Tuesday at Mondobag Railway Station of Kashba under Brahmanbaria.

After visiting the spot, the complete probe report was submitted to the DG. He, however, informed that the Railways Minister and DG will formally brief in Dhaka in this regard.

Nasir said the train driver of Turna Nishitha Taser Uddin and Assistant Driver Opu Dey had been blamed for the accident while guard Abdur Rahman was blamed for negligence. The committee confirmed that the two drivers were sleeping.

However, the drivers claimed that they could not see the signal of the station due to fog and deposition of soil. But the claim was not found to be true, the railway authorities said.

On Thursday, the media was briefed about the cause of the accident and several recommendations after the completion of 99 percent investigation.