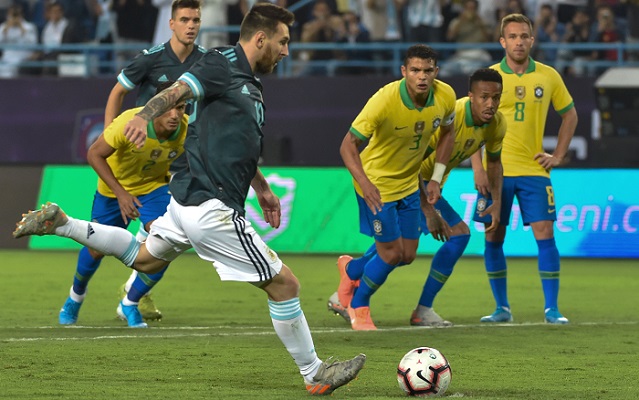 Argentina got a 1-0 victory over arch-rival Brazil in a friendly match at the King Saud University stadium in the Saudi capital Riyadh on Friday.

On his return from a three-month ban, Argentina’s forward Lionel Messi scored the only goal from a penalty shot at the 13th minute in the first half.

Messi missed Argentina's previous four matches due to a suspension for accusing CONMEBOL of favouring hosts Brazil – who won their semi-final meeting – at the Copa America and he made a decisive impact in the friendly, billed as the Superclasico de las Americas, as the Selecao's winless streak reached five games.

The five-time Ballon d'Or winner earned Argentina an early penalty and netted at the second time of asking after Gabriel Jesus had also spurned an opportunity from 12 yards.

Another couple of chances were crafted for Messi, but he failed to add to his tally and the match became extremely scrappy and disjointed after the break, with clear-cut chances at a premium.

A ferocious start saw both sides awarded a penalty inside the first 12 minutes and remarkably neither of them were scored, with Jesus missing the target after being tripped by Leandro Paredes, before Messi had his saved by Alisson.

But luckily for Argentina and the returning Messi, Alisson put the ball right back into the danger zone and the Barcelona star buried the rebound.

Messi went close to a second in rather more characteristic fashion, as he dribbled from inside his own half and got a shot away from the edge of the box, but his effort was a little tame and Alisson stopped it easily.

The second half was significantly untidier, though Argentina still looked more threatening, with Messi's long-range free-kick forcing Alisson to tip it over.

Lautaro Martinez should have wrapped things up 10 minutes from time when he blazed over inside the area, though Brazil – who handed Rodrygo Goes and Wesley debuts from the bench – were unable to punish the let-off and Argentina claimed victory.

Through this win, Argentina's unbeaten run extends to six games and they will be hoping to end their year on a high with another win against Uruguay on Monday.

Brazil's winless run continues as Tite's side are now without a win in five games. He will be hoping to turn things around in their next game though when they face South Korea.