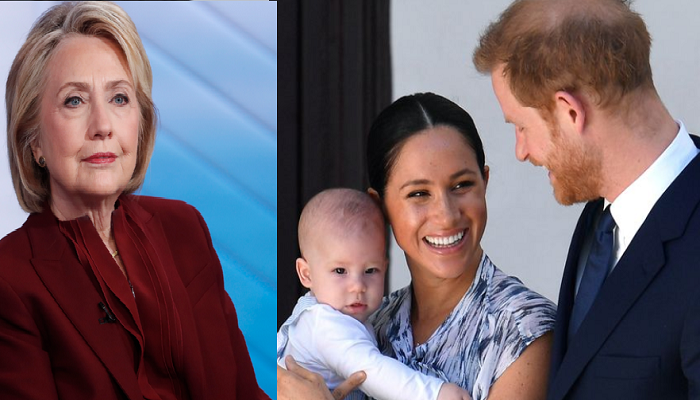 Meghan Markle invited former First Lady Hillary Clinton to Frogmore Cottage for a "mutual fan girl" meeting - and she even got to have a cuddle with Archie.

According to insiders the two women admire each other and shared a big hug when they met in Windsor on Tuesday.

Prince Harry was at home during their meeting and Hillary held little Archie while chatting to the couple about her third grandchild Jasper.

A source told the Mail : "Both women have a lot of admiration for each other and it was a very sweet, warm meeting. They are mutual fan girls!'

It's the first time Meghan has met Hillary, however she has long admired her and wrote to her when she was just 11.

She asked for the then First Lady's help getting a "sexist" TV advert for washing up liquid banned, but it's unclear if she ever got a reply.

In recent weeks Hillary has defended Meghan in interviews, hitting out at comments made about the Duchess on social media.

She said race was "clearly an element" and said she wanted to tell her to "hang in there".

Speaking to the BBC she said: "I feel as a mother I just want to put my arms around her.

"Oh my God, I want to hug her. I want to tell her to hang in there, don't let those bad guys get you down, keep going, do what you think is right."

She described Meghan as "an amazing young woman".

The meeting came at the same time it was revealed that Meghan and Harry are taking a six-week break from their royal duties.

They will also skip Christmas with the Queen and the rest of the Royal Family, travelling to America to see Meghan's mum Doria Ragland in California instead.

Prince William and Kate are expected at Sandringham with their three children and other members of the royal family as a rift between the two brothers shows no sign of being quashed.

A Buckingham Palace spokesperson said: “The Duke and Duchess of Sussex are looking forward to extended family time towards the end of this month.

“Having spent the last two Christmases at Sandringham, Their Royal Highnesses will spend the holiday this year, as a new family, with the Duchess’ mother Doria Ragland.