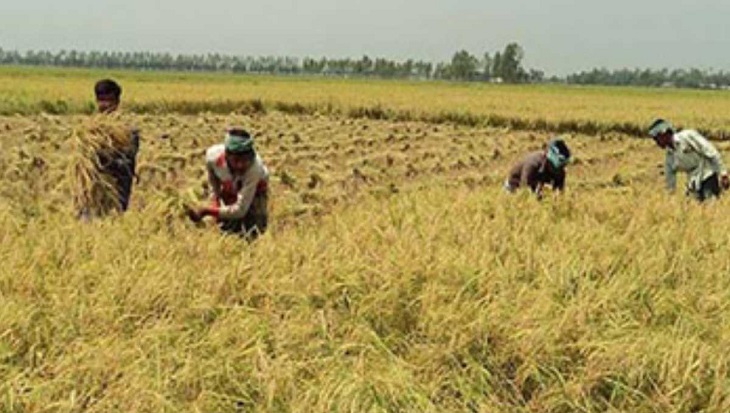 Low prices of Aman paddy have spoiled the joy of ‘Nobanno Utshob’ as farmers are incurring huge losses and hardly making any profit in the current Aman season.

‘Nobanno Utshob’, a festival of harvesting new crops, is a joyful event in the life of Bengali people, especially in the life of the farmers who work hard to grow crops and wait for their harvest time with great hope in their hearts.

But the farmer could not meet the production cost after selling their grown paddy though the rice price at the customer level did not decrease.

Aman is the second-biggest crop out of the three rice crops produced by growers in a year, accounting roughly 38 per cent of the total production.

The celebration of this festival of bringing new crops home has been an inseparable part of the tradition and culture of eternal Bangla at Pahela Agrahayan during Hemanta (late autumn).

A change in the air and with eye-catching sights of golden coloured paddy fields gives the signal of Hemanta (late autumn).

‘Aman’ is the harvest for which the farmers would wait the whole year as the production of rice becomes huge during this time. The ‘Aman’ crop ripens in Kartik to Agrahayon.

A farmer’s fate would be determined in the month of Kartik because a good harvest in this month meant that the family of a farmer was safe for one more year.  And as soon as the Aman crop would be ready for harvest in Kartik, with pleasant weather and surplus food grains, rural Bengal used to be very happy.

In the past, farmers celebrated this festival in different ways. The families of the farmers would celebrate the occasion by preparing different kinds of food items, eating those tasty foods made from new crops and offering them to their neighbours as well.

But, all of their happiness has been spoiled as they are not getting fair price of their paddy after witnesses a good production this year.

The harvesting of Aman paddy started since the mid-October and will continue till January. Farmers are

witnessing bumper production of Aman rice this year due to favourable weather conditions.

Coarse paddy is now trading at Tk 450-Tk 500 per maund in various areas in the northwest, in contrast to Tk 650-Tk 720 a year ago. At this rate, farmers are unlikely to make any profit, said some growers and traders.

Farmers are also fearing that the price of Amn paddy will fall further as more Aman paddy will appear in the market soon after harvesting.

Growers have planted Aman on 5.8948 million hectares of land during  the last monsoon against the target of 5.879 million hectors and production target was 15.358 million tonnes, according to the Department of Agricultural Extension (DAE).

Abdul Haqim, a farmer from Kurigram said, the production cost of Aman paddy is higher this year but the prices are lower.

“We had to spend for irrigation in the face of scanty rainfall this year,” he said, adding that the prices of pesticides were also higher this season.

He also said, “If the paddy prices do not increase, there will not be any profit for us.”

A syndication of the millers and their allied traders during the peak harvesting season is bagging paddy from farmers in low price. Farmers claimed that millers are purchasing paddy from farmers without giving fair prices. Farm economist ASM Golam Hafeez, also a professor at the Department of Agricultural Finance at Faculty of Agricultural Economics & Rural Sociology in Bangladesh Agriculture University (BAU), told the Daily Sun that farmers are losing charm to produce paddy as they could not meet the production costs by selling their grown paddy.

He said the government should procure more paddies directly from the farmer to pay them fair prices. “The country will face scarcity of rice if this situation will continue three of four more years,” said the agricultural economist. “Farmers did not get any returns for their outstanding job due to government negligence,” he said, adding that government could introduce short term loan for real poor paddy farmer.

On October 31, the government decided to procure 0.6 million tonnes of Aman paddy directly from farmers and 4 lakh tonnes of rice from millers in the upcoming Aman seasons.

The paddy will be procured at the rate of Tk 26 per kilogramme (Kgs) from November 20 to February 28 next while rice at Tk 36 per kg from December 1 to February 28, Food Minister Sadhan Chandra Majumder said at a press conference at the secretariat on Thursday after a meeting of Food Planning & Monitoring Committee.