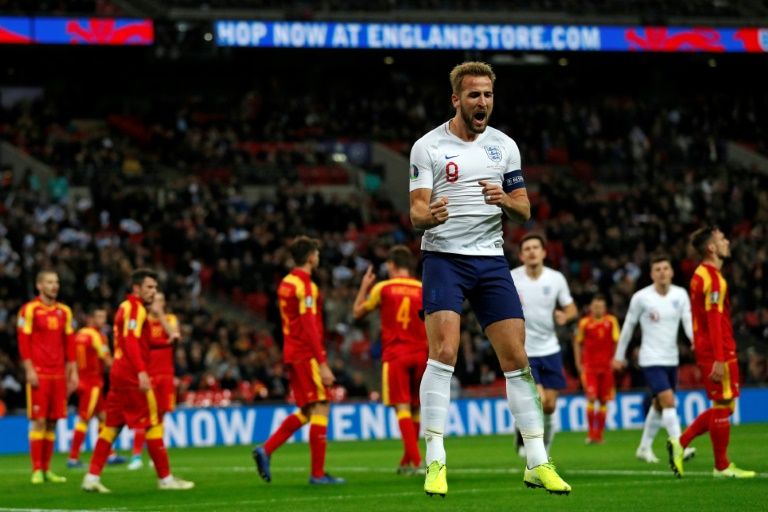 England manager Gareth Southgate reveled in his side’s ruthlessness as a 7-0 thrashing of Montenegro sealed qualification for Euro 2020 in style in the Three Lions’ 1,000th match.

Even without Raheem Sterling, who was dropped by Southgate earlier in the week after a physical altercation with teammate Joe Gomez, England displayed the firepower that will make them one of the favourites for next year’s European Championship.

Harry Kane moved into sixth in the all-time list of England goalscorers with a first half hat-trick to take his tally for the qualifying campaign to 11 in seven games.

Alex Oxlade-Chamberlain, Marcus Rashford, Aleksandar Sofranac’s own goal and Tammy Abraham’s first at international level rounded off the scoring as Southgate’s men sealed top spot in Group A with a stunning record of 33 goals in seven games.

“In the past we have maybe struggled against lower ranked teams who defend in numbers, but we have players who can open those teams up and a style of play that can do that,” said Southgate. “We have qualified and done it clinically.”

After an unexpectedly turbulent week for Southgate as his decision to go public with the sanction for Sterling was criticised, there was some relief as once again his side tore apart mediocre opposition.

“The quality of our attacking play was excellent,” added Southgate. “We expected to win the group but we’ve totally taken teams apart.”

However, there was still time for the clash between Sterling and Gomez to take the shine off a fine performance as the Liverpool defender was booed by some of the 77,000 in attendance when he entered for a late substitute appearance.

“Ir was hard for me to see my teammate get booed for something that was my fault,” Sterling tweeted.

“Joe hasn’t done anything wrong and for me to see someone who keeps his head down and works hard, especially after a difficult week for him, to be booed when he came on tonight was wrong.”

Oxlade-Chamberlain continued his recent goalscoring streak for Liverpool with an excellent finish from Ben Chilwell’s cross to open the floodgates on 11 minutes.

Chilwell’s superb club form for Leicester saw him earn a start ahead of Danny Rose at left-back and a hat-trick of first half assists made his case to be first choice for Southgate at the Euros.

Kane had seen a few chances go begging before heading home a Chilwell free- kick and more awful Montenegrin marking gave the England captain an easy chance to double his tally from another Chilwell set-piece delivery.

Rashford was starting in the role on the left of a front three normally occupied by Sterling and looked in the mood to take advantage of a rare start in his favoured position as he cut inside to smash home the fourth.

That goal came from a Trent Alexander-Arnold cross and just like Chilwell, the Liverpool right-back’s delivery was a constant threat.

Alexander-Arnold was the provider again for Kane to complete his hat-trick as he was given the space inside the six yard box to control and fire into the far corner for his 31st international goal to move ahead of Tom Finney, Alan Shearer and Nat Lofthouse’s mark of 30.

“We wanted to put on a show in our 1,000th game and with five goals in the first half I think we did that,” said Kane.

The hosts were given more gifts from the Montenegro defence when Sofranac blasted into his own net 24 minutes from time.

Abraham has outscored Kane in the Premier League so far this season and even if his chances of taking the skipper’s number nine shirt are slim, the Chelsea striker also made his mark by sliding home England’s seventh from Jadon Sancho’s cross.