12-yr into Sidr: Bagerhat residents yet to get durable embankment 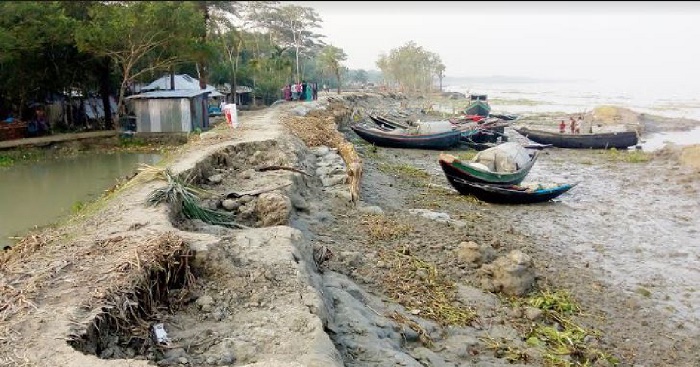 Twelve years ago, another much stronger cyclone, 'Sidr',  took a similar path to ‘Bulbul’  that ripped through the coastal districts, including Bagerhat.

On November 15, 2007, the super cyclone left a trail of destruction in the coastal region, battering villages after villages and destroying embankments along the rivers, including the Baleshwar.

However, a durable embankment is yet to be constructed along the Baleshwar River to protect locals from natural calamities, including cyclonic storms and tidal surges.

The nightmarish memories of the devastating cyclone still haunt the coastal residents, especially those in Sharankhola upazila here, who lost their beloved ones as well as the belongings in the cyclone.

The tidal surges during the storm shattered the embankment along the Baleshwar River before inundating villages after villages in the coastal areas.

In 2016, a Tk 696-crore project was taken to construct a 62-km durable embankment along the river in Sadar, Sharankhola, Morelganj and Rampal upazilas of Bagerhat and Dacope of Khulna district.

During a recent visit to the Bogi portion of dyke in Sharankhola, this correspondent found that work on the embankment which began four years ago is yet to complete.

About 70 percent work has been done and it will take one more year to complete the work, said sources.

However, locals fear that the work might not be completed within the extended time.

Over a two-km stretch from Gabtala to Bogi went into the river over all these years while some more points are at the risk of being devoured by the river anytime soon.

Shyamol Kumar Dutta, supervising engineer for the embankment project, said the construction of the 62-km durable embankment started on January 26, 2016.

The work was supposed to be completed by January 2019 but the time was extended till June, 2020.

The 62-km embankment was later curtailed to a 52-km one as the rest 10-km road was deducted which was under the Local Government Engineering Department (LGED) in between Sharankhola and Morelganj upazilas.

“The embankment will be an international standard one,” he claimed.

Md Ashraful Alam, executive engineer of the project, said work on 40 kms of the embankment has been completed while work on another five-km portion of the dyke is going on and that on another seven kilometres in Rayenda and Bogi will start soon.

He said they have sent a proposal for acquiring six acres of land in Bogi area and work will start there once the land is acquired.

He also said they will reconstruct the damaged sluice gates, excavate rivers unde the project.

Nahid-Uz-Zaman, executive engineer of Bagerhat Water Development Board (WDB), said they have taken a project to train the Baleshwar River to make the embankment durable.

Babul Hawlader, 45, of Bogi village said he sent his wife and children to a shelter centre and stayed back home alone on the night when cyclone ‘Bulbul’ hit the coastal districts in the early hours of November 10. “My house was flooded following ebb tide and I survived holding a tree on the embankment.”

He also said the Baleshwar River ate way his two bighas of his land.

Babul said he is frustrated as the embankment is being constructed leaving his house vulnerable to the river erosion.

President of Gabtala Ashar Alo mosque-cum-cyclone centre Abdul Barek Hawlader said the Baleshwar River is now approaching the mosque to devour it. “If a durable embankment is not built as soon as possible, the cyclone shelter will also go to the river,” he added.

Md Mozammel Hossain, Southkhali union parishad chairman, said residents of his union have been losing their homesteads and land to the river frequently.

He urged the authorities to train the river first and later construct the embankment.

Some 908 people were killed and 76 others went missing in the district during cyclonic storm Sidr that lashed the coastal districts on November 15, 2007. Some 1,627 square kilometres of areas were destroyed while 65,000 houses were damaged by the cyclone.