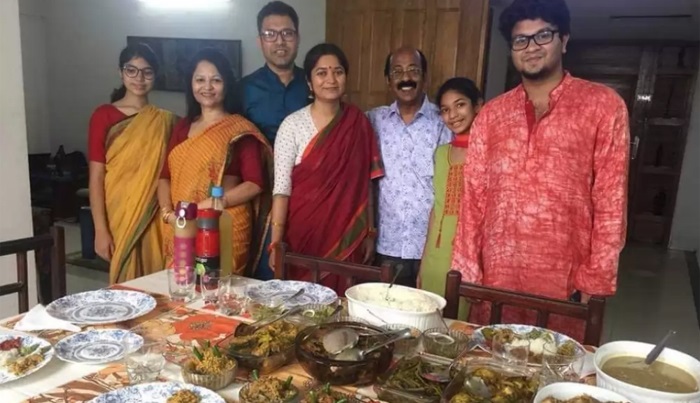 The marriage of poet Gultekin Khan and Aftab Ahmed become the talk of the country on Wednesday, November 13, the 71st birth anniversary of Humayun Ahmed.

Once Gultekin Ahmed mother of four children became Gultekin Khan in 2003 after being separated from her writer husband and has been remained single for about 16 years (till late October 2019).

According to the media report, poet Gultekin Khan tied the knot with poet Aftab Ahmed, also Additional Secretary of the Ministry of Youth and Sports, in the last week of October with the consent of her children and family members.

The new couple has been showered with greetings and wishes by her loved ones and aspirants for starting a new life.

Nuhash Ahmed, the elder son of Gultekin and Humayun Ahmed, told a media that they were happy with this decision of his mother. He and his sisters were always beside her mother and welcomed her for starting a new life.

“I myself was present there and arranged my mother’s marriage, there is nothing to hide. I think, through this marriage, a new horizon has opened for women,” Nuhash said.

He said, “Mother raised us with a strong hand. Never let us face any lack. She did not let the family break. Mom is always the ideal for us.”

"I seek everyone’s blesses for this new couple, and there will also be a reception shortly, InshaAllah,” he added.

For the last 7/8 years, after being separated from Humayun Ahmed in 2003, Gultikin got involved in a friendship with Aftab Ahmed. The friendship slowly turned into a deep affection to love.

Aftab Ahmed, the father of a child studying in London, also got separated from his barrister wife 10 years ago.

Aftab Ahmad and Gultekin wrote a lyrical-drama book titled 'Modhuren', which hit the stall in the 2017 Ekushey Book Fair.