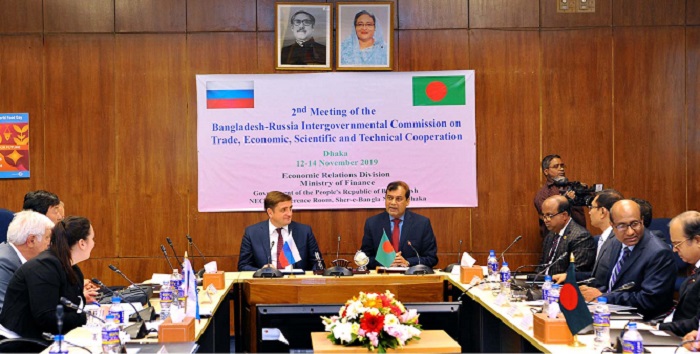 Bangladesh signed a protocol with the Russian Federation on Thursday to promote bilateral relations on trade, economy, science and technology.

The protocol was signed at the 2nd meeting of Bangladesh-Russia Inter-Governmental Commission on Trade, Economic, Scientific and Technical Cooperation.

The meeting was held from 12 to 14 November at the Economic Relations Division (ERD) in Dhaka.

“Russia has been extending its support to Bangladesh since independence. Following the Liberation War, it helped us remove mines and set up heavy industries,” Monowar told a joint briefing.

“Russia is a friendly nation for us. And there is still an ample scope to advance bilateral cooperation,” he added.

The protocol was signed after holding a long discussion between the two governments.

The Bangladesh government also invited investment from Russia in the 100 economic zones that it is trying to set up across the country as part of wooing local and foreign investments.

Besides, it has sought Russian support for modernising Siddhirganj and Gorashal thermal power plants that had also been set up with the help of Russian government.

Both sides reached a consensus to quickly implement the construction work of the ongoing Rooppur nuclear power plant within the stipulated timeframe.

They agreed to further advance cooperation between local Petrobangla and Russian state-owned company Gazprom in gas exploration and setting up distribution lines.

The Russian government, on the other hand, showed interest in working for the power and energy sector, especially LNG export to Bangladesh, strengthening Petrobangla, and cooperation in the civil aviation industry.

Regarding the LNG import proposal, Bangladesh told the Russian delegation that the proposal might be considered in the future, ERD officials said.

Ilya V Shestakov told reporters that all the action plans undertaken for the development of Bangladesh will be implemented as scheduled.

He also assured that the work of the Rooppur nuke power plant will be completed in line with its deadline.

Ilya said Russia as the leading nuclear power technology provider is constructing such a plant in many countries, which will be completed as well on their stipulated timeframe.

He invited Bangladeshi students to pursue higher studies on nuclear technology and other scientific fields in Russian institutions.

The consensus on removing bottlenecks in banking settlement was a major achievement of the meeting as the problem was holding bank bilateral trade, ERD officials informed.