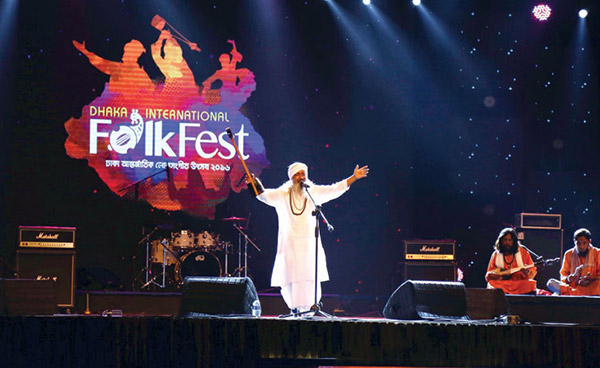 With an aim to strengthen and revivify the rich folk songs of Bangladesh in association with a variety of folk music from across the world, the fifth edition of Dhaka International FolkFest began at Bangladesh Army Stadium in the capital on Thursday.

The objective of the musical soiree is to get the new generation audiences and listeners acquainted with the folk instruments and make their presence felt.

Planning Minister MA Mannan inaugurated the festival at a grand opening ceremony as the chief guest.

Sun Foundation arranged the three-day carnival which will be concluded tomorrow.

Thousands of music buffs from across the city converged on the venue in droves on the opening day and enjoyed folk music to the fullest.

With nuanced and graceful steps, lathi khela, cartwheels, bamboo fights and many other stunts and tricks, the group presentation was captivating for the viewers.

Later, the folk musical group Chveneburebi held the viewers spellbound with its melodies of Georgia. The audience immersed themselves into the amazing energy and dazzling vocal pieces that filled the stage with a spectacular atmosphere of flashy Eurasian folk music.

Shah Alam Sarkar, a legendary folk lyricist, composer, musician and singer of Munshiganj, enthralled the music enthusiasts through his powerful.

A round of rapturous applause remained reserved for the night’s last performer India’s Punjab songwriter and singer Daler Mehndi who stole the show with his dazzling performance.