BNP will cease to exist for its negative politics: Hasan 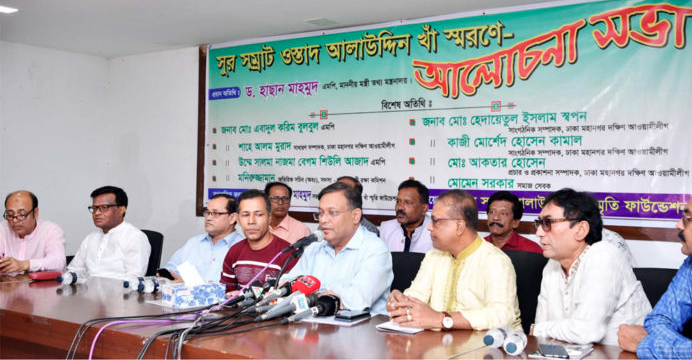 Pointing to coming of all decisions of BNP from abroad and recent quitting of the party’s senior leaders, Information Minister Dr Hasan Mahmud said BNP will face existence crisis for indulging in negative politics.

He grilled BNP for pursuing the politics of negation that simply goes against the welfare of the people, saying the party will be squeezed in size in near future.

“BNP leaders, even its secretary general Mirza Fakhrul Islam Alamgir, have no rights to express their opinions,” Hasan said, addressing a memorial meeting at an auditorium of Jatiya Press Club here.

The information minister said all decisions of the BNP come from abroad with no bearing on the ground reality. “For this, many senior leaders of BNP are quitting the party. BNP should refrain from pursuing the politics devoid of realistic footing, and also against the common people and attacks on the masses,” said Hasan, also the publicity and publication secretary of Awami League.

He said BNP didn’t do politics for the welfare of the common people. BNP did politics only for their own interest, not for mass people, he added.

Criticizing a comment of BNP leader Mirza Fakhrul Islam Alamgir on quitting of BNP leaders, he said now many BNP leaders may seek for self-satisfaction. “But the reality is that the list of BNP’s senior leaders quitting the party will be longer. BNP will see the actual scenario in near future,” Hasan added.

“The senior leaders are not able to take any decision as all the decisions of the party come from abroad. For this, the party has become isolated from the people,” he said.

The information minister said many leaders of BNP have communicated with the Awami League leaders at different levels. But it is not possible to take anyone in the party (AL), he added.

Reminiscing the contributions of Ustad Alauddin Khan to music, the information minister said he would ever be remembered in field of culture for his creative and inspirational songs.

Urging all to involve the youths in sports and cultural activities, Hasan said there is no alternative to practicing sports and culture to protect the country from militancy, terrorism and erosion of social values.

“The new generation would have to be engaged with sports and cultural activities to keep them away from militancy and terrorism,” he added.