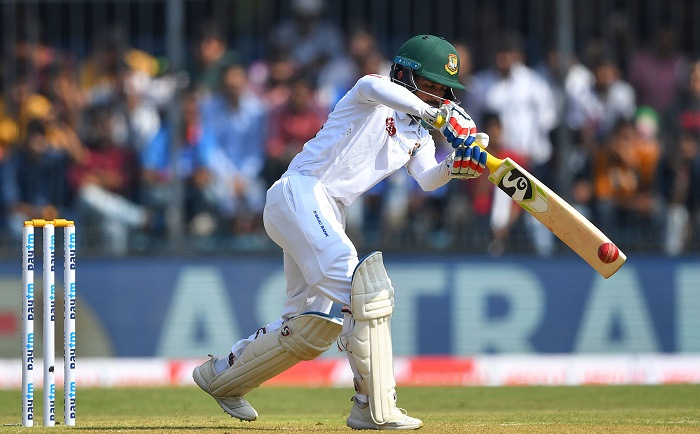 Bangladesh's cricketer Mominul Haque plays a shot on the first day of the first Test cricket match between India and Bangladesh at the Holkar Cricket Stadium in Indore on November 14, 2019. –AFP

Tigers have lost early three wickets as openers Imrul Kayes and Shadman Islam have failed to prove their worth in the opening Test against India in Indore on Thursday.

Mohammad Mithun also followed the path of the openers after he scored 12 before departing the crease.

Bangladesh skipper Mominul Haque, with ‘Mr Dependable’ Mushfiqur Rahim, are now currently struggling at the crease to tackle the early blows from the Indian bowlers.

In his first match as Bangladesh's captain, Mominul looked resolute, Rahim joined him at 31 for three and they have started with the damage control.

Bangladesh are now at 63 for 3 in their first session and have gone for the lunch break after 26 overs.

Earlier in the morning, Mominul won the toss and elected to bat first against India.

Bangladesh are missing their two premier cricketers Shakib Al Hasan and Tamim Iqbal for different reasons but that didn't stop them from beating India for the first time in T20Is at New Delhi about 10 days ago and there is no reason why they cannot do that in the Test series.

But things might be bit more difficult in the longest format, especially considering India's staggering record at home.