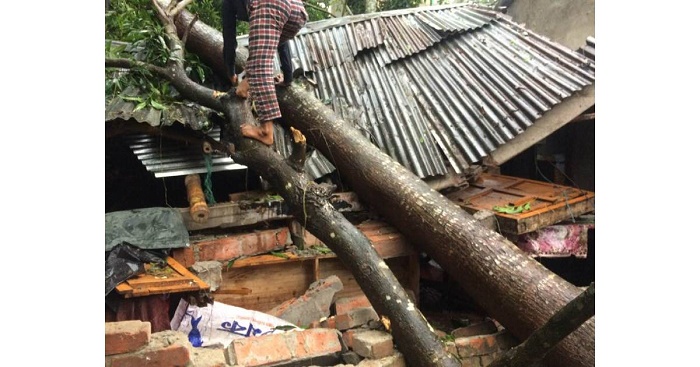 The electricity supply system of Bagerhat Rural Electrification Board (REB) was severely affected by the cyclonic storm Bulbul that lashed the country’s coastal districts in the early hours of Sunday.

Nearly 1 lakh REB consumers in the district have been living without power for four days, as the electricity supply system was not restored to full capacity till Wednesday, despite frantic efforts by the authorities concerned.

According to REB, a total of 415 poles collapsed while 554 got tilted during the storm at different points of the district. Besides, supply wires got snapped at 411 points while trees collapsed onto electric wires at 10,889 spots.

The REB incurred a loss of around Tk 4 crore due to the storm, its officials said.

They said although they managed to restore power supply in upazila townships, residents of numerous villages are still without power.

A total of 278,000 (2.78 lakh) consumers in these upazilas were left without power after Bulbul hit. Subsequently, 183,000 (1.83 lakh) consumers in a number of the affected upazilas have got the power supply restored. But, the officials said, 95,000 consumers are still suffering from power cut.

Although a total of 1,500 people are working round the clock to restore the electricity supply in the affected areas, Jakir Hossain blamed manpower shortage for the continued delay being faced by these consumers.

His optimism could only extend as far as saying the electricity supply will be back to normal “within the next two or three days”.

That, however, comes as scant consolation for the residents of different villages that have been left without electricity for the last four days.

“We’re facing enormous problems due to power cut. Particularly, we’re facing problems in recharging phones without which we have little or no option to contact relatives,” complained a resident.

They urged the authorities concerned to restore the supply system as early as possible.