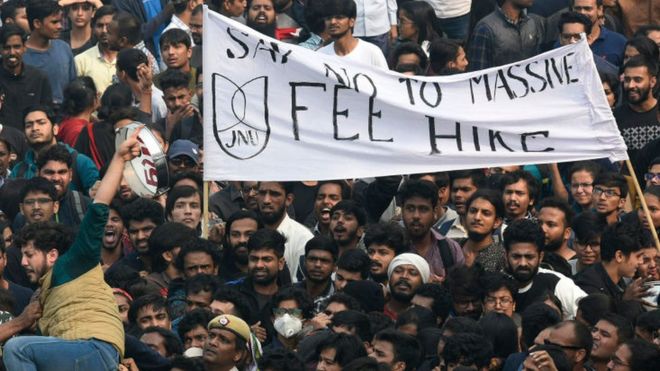 One of India's most prestigious universities has partially rolled back a hostel fee hike, days after thousands of protesting students clashed with police over the issue.

A government official tweeted a "major rollback" in the fees for Jawaharlal Nehru University had been decided, but did not elaborate.

Officials had defended the 150% fee hike, saying it was "too subsidised".

But many said cheaper fees made it possible for poorer students to study.

The row escalated earlier this week when thousands of students gathered outside an auditorium where a graduation ceremony was taking place.

Police used water cannon after they broke through barricades and surged forward.

"The protests will continue until our demands are met. We are not taking this stand because we are stubborn but because there are many students here who cannot afford to pay this fee," one of the protesting students told BBC Hindi's Vineet Khare.

They also said they were left with no other choice than to demonstrate outside the event, which was attended by India's vice-president and a federal minister.

"Nobody from the administration is talking to us. We have repeatedly asked officials to meet. We even went to their offices several times, but they didn't bother to meet us," one student said.