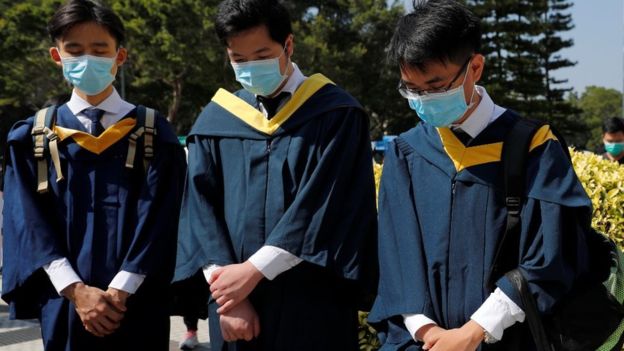 Hong Kong has announced that all schools including kindergartens will be closed on Thursday as the territory faces another day of escalating unrest.

On Wednesday, the city saw continued anti-government protests after a night of pitched battles at a top university.

Clashes then continued in different parts of the city.

In the afternoon, the Education Bureau announced that every kindergarten, primary school and high school would suspend lessons on Thursday for safety reasons.

They would remain open, though, for children who need supervision, officials said.

It is the first time that all schools across the territory will close due to the protests. Earlier in the week, many schools had already individually suspended classes.

Several universities have also cancelled classes for the next few days.

What is happening now?

Protesters called for a third day of strikes with disruption at several metro stations leading to a morning of long delays and queues.

Activists continued to block roads and build barricades, causing confrontations with police in Yuen Long and at some of the territory's universities.

Police said they assisted a group of mainland students who wanted to leave the campus of the Chinese University of Hong Kong (CUHK) for safety reasons but were unable to do so due to "roadblocks set up by mobs".

Fresh lunchtime protests in the financial district saw crowds gather to chant slogans. Some black-clad protesters also vandalised a branch of the mainland Bank of Communications.

A session at the city's parliament, known as the Legislative Council, was briefly suspended after opposition politicians angrily questioned the security chief over alleged police brutality.

Why the spike in anger?

This week has seen a marked escalation in violence with intense street battles, violent clashes at universities and flashmob lunchtime protests in the financial heart of Hong Kong.

It is the first time in weeks that protests are taking place during weekdays.

The protests on Monday followed a weekend of vigils and demonstrations after a 22-year-old student protester died on Friday.

Alex Chow had been in hospital since he fell from the ledge of a car park during a police operation a week ago.

Later on Monday, violence escalated further when a police officer shot an activist in the torso with a live bullet and a pro-government supporter was set on fire by protesters.

What happened at the university last night?

On Tuesday police moved on to the grounds of the CUHK with tear gas and water cannons while protesters threw bricks and petrol bombs at them.

Students expressed anger that police were moving their operations on to campuses but police warned that the rule of law was close to "collapse".

The police decision to enter campuses signals a shift in strategy, correspondents say, as they have largely avoided clearance operations at schools and universities.

Throughout the night there were chaotic scenes of explosions, smoke, and the firing of rubber bullets. Scores of people were reported injured.

"This is not only to defend the Chinese University of Hong Kong. It represents the human spirit of defending political freedom and the rights which should be enjoyed by Hong Kongers," a year-five student told the BBC.

Paramedics were treating at least 70 people after the clashes, local media reported, with at least four being seriously injured.

Hong Kong is part of China but as a former British colony it has some autonomy and people have more rights.

The protests started in June against plans to allow extradition to the mainland - which many feared would erode the city's freedoms.

The bill was withdrawn in September but demonstrations continued and now call for full democracy and an inquiry into police behaviour.

Clashes between police and activists have become increasingly violent and in October the city banned all face masks.