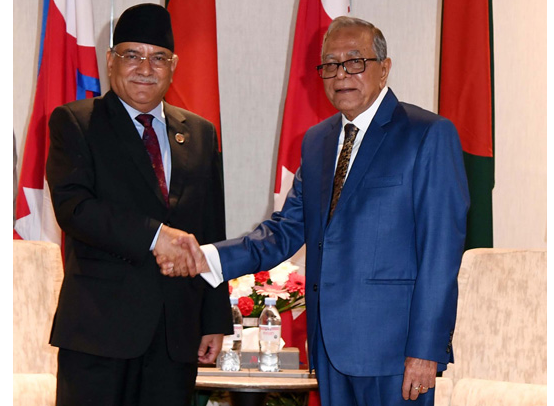 President M Abdul Hamid said Bangladesh is providing multiple entry student visas for a period of four years or for the duration of the course to Nepalese students only.

The President disclosed the matter when former Prime Minister and Co-Chair of the ruling Nepal Communist Party Pushpa Kamal Dahal (Prachanda) paid a courtesy call on him at the place of residence at Marriott Hotel here this noon.

“Taking the matter into consideration the request of the government of Nepal from June 2019, Bangladesh is granting long term multiple entry students’ visas for a period of four years or the duration of the course, to Nepalese students,” President’s Press Secretary Joynal Abedin quoted the President as saying.

Noting that Bangladesh has attached great importance to its relations with Nepal which is based on historic linkages and multitude of commonalities, President Hamid said there is a lot of scope to turn the existing bilateral relation into multilateral ones.

“We have many potentials to avail in the field of trade, commerce and investment,” the head of the state observed.

He also laid emphasis on enhancing connectivity in road-river-airways between Bangladesh and Nepal.

The president mentioned that Bangladesh has unilaterally offered Nepal for the use of Chattogram and Mongla ports and access to the sea.

Along with the infrastructure of the rest of the country, facilities of both the ports have been tremendously developed with enhanced capacity for handling increased traffic, he added.

He hoped that Bangladesh and Nepal will continue their traditionally close cooperation in multilateral and regional forums and continue to work together for achieving common aspirations.

Earlier, Chairman of the National Assembly (Upper House) of Nepal Ganesh Prasad Timilsina called on President M Abdul Hamid at the same venue at the place of residence here.

During the meeting, Abdul Hamid emphasized that both countries need to collaborate intensely in identified areas of interest under the platforms of the Bay of Bengal Initiative for Multi-Sectoral Technical and Economic Cooperation (BIMSTEC) as well as the South Asian Association for Regional Cooperation (SAARC).

He congratulated the Nepalese people and political leadership for completing the peaceful transition to democracy and successfully completing all the three tiers of elections (local, provincial and parliamentary) in 2017 and thereby completing the process of implementation of the constitution adopted in 2015.

All the Nepalese leaders wished him (the President) good health, long life and happiness and for friendly people of Bangladesh, continued peace, prosperity and stability.