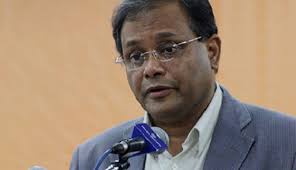 Recalling the situation after the assassination of Bangabandhu on August 15, 1975, Dr Hasan said Babu Bhai contributed a lot to reorganize the party as it was facing a series of oppressions by the anti-liberation forces.

He was addressing a memorial meeting for Akhtaruzzaman Babu as special guest at KB Convention Hall in the city.

Minister for Roads, Transport and Bridges Obaidul Quader was the chief guest at the meeting.

Babu Bhai upheld the flag of Independent Bangladesh on the holy soil of Chattogram after gruesome killing of Bangabandhu and most of his family members, Hasan added.

Moreover, Babu Bhai was one of those who played an important role to pave the path for Sheikh Hasina’s return from abroad years after Bangabandhu’s assassination, he said.

He said Babu Bhai was a cooperative personality in political arena and none came back from him without any benefits.

Dr Hasan Mahmud also said he had opportunity to work with Babu Bhai and observed his outstanding political behaviors with the leaders and workers.

He further said many with Babu Bhai’s help became Directors of Banks and Insurance Companies.

“Babu Bhai will be remembered for his sacrifices in independent Bangladesh and he never betrayed Bangabandhu, Prime Minister Sheikh Hasina as well as the party,” he added.

Dr Hasan said late Akhtaruzzaman Babu never felt proud identifying himself as an industrialist, he was rather happy to be known as a politician and always showed his love for people irrespective of caste and creed.