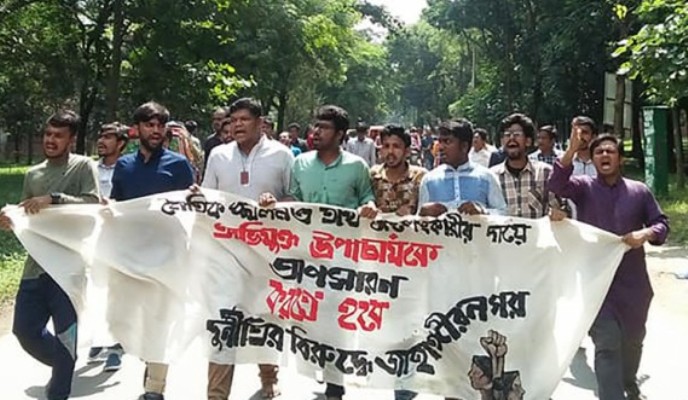 A group of teachers and students continued demonstration defying a ban on Wednesday seeking the removal of Vice-Chancellor Professor Farzana Islam.

United under ‘Jahangirnagar Against Corruption’, the protesters took out a procession from the Murad Chattar around 1:30pm and marched through the campus before holding a brief rally in front of the old administrative building.

Chhatra Union leader Oliur Rahman said their “peaceful and logical demonstration” has been attacked but it could not be stopped even after the administration closed the halls.

“The VC should step down not only for corruption but also for the current stalemate,” he said.

“But the VC and the administration don’t want it. They’ve closed the university out of fear but protests will resume when the university will open,” he said. “The government should investigate (charges of corruption) and help the university run smoothly.”

Prof Rayhan Rhyne, coordinator of the protest, said they had filed information and evidence of corruption. “But no probe body has been formed yet, demonstrating a lack of goodwill of the government,” he said.