Of Crimes and Bloodshed 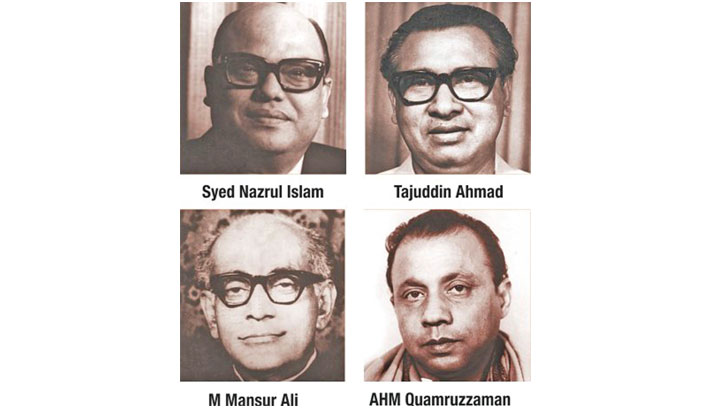 The month of November is one the most depressing months in the annuls of our history in the whole year. This heart breaking month of November has come again in our collective life. Let us roll back the 44 years to 1975. Crime, murder, and tragedy which had despoiled, robbed and destroyed our whole or aggregate lifeblood by force and violence by some uncultured, aggressive, rude, noisy troublemakers under the drawing card of a Punic and perfidious sub-human like Khondokar Mushtaq Ahmed. National leaders: former Vice-President Syed Nazrul Islam, former Prime Minister Tajuddin Ahmad, former Prime Minister Captain (Rtd.) Mansur Ali, and former Home Minister AHM Qamaruzzaman were assassinated 79 days after Bangabandhu Sheikh Mujibur Rahman brutal murder while they were interned illegally at the Dhaka Central jail. They inspired, cared, and had a general love for all mankind. They truly lived to make the world a better place. They were selfless and wonderful men. The greatest voices of the planet were lost to brutal murders more than four decades back. These murders are definitely the most tragic deaths; and we lost the biggest politicians who walked on this earth.

The sun is not yet down; my heart is in thought usually benevolent, now consumed by wrath. A nation that was once potential like air had gone with the wind leaving mockery and despair. How did this happen in August and in November in 1975, what happened to love which was overtaken by madness called orders from roughnecks. Those men of surpassing excellence who loved us so dearly and created a native land for us have encountered so much unmerciful death; in their place, a deadly beast emerged! We, in the land, once sang songs of victory! Now, we sing songs of woe – woe for the lost spirits and values of our glorious Liberation War of 1971; woe for the death of hope, and woe for the death of Saviours! We must begin a new battle. This is not a battle for gold. Nor it is a battle for the belly of any might. This is a crusade to restore a hope, a future for our scion.

We commemorate the jail killing of four golden sons of our history lesson with tormented hearts on this calamitous month which bechanced in 1975. Their lives might be a spectacular book of innumerable pages for anyone interested in political history. Turn the resplendent pages of our history in the 1950s, 1960s and 1970s and their leadership tones and one would be astounded with their noble-minded and moral deeds for the people of Bangladesh. Their passion and love for the people of Bangladesh leaps from the pages. The just did the best they possibly could for the country—even giving up their precious lives at gun points and bayonet charges.

They were bluntly honest in carrying out their jobs for the welfare of their people and creating our own homeland. Their personalities and methods are so fascinating that they tend to overshadow the big picture. They used every minute of the day to its potential in order to develop their plan for Bangladesh. Their hope was that this plan would allow every Bengalis to partake at some level in the incredible success that the nation was not experiencing during the days of Pakistani rulers. But we were proud of the struggle for our independence, of tears, of fire, and of blood, to the depths of our being, for it was a noble and just struggle, and indispensable to put an end to the humiliating treatments which were imposed upon us by force by the foreign sawyers. So it pains me; it pains every conscious citizen of this country, to see the state whose birth so inspired me or us like ordinary citizens’ degenerate into such a political tragedy.

America’s disdainful CIA had plotted in connivance with Pakistan’s rogue military-political obnoxious nexus and perished Bangabandhu Sheikh Mujibur Rahman and his above-quoted four most trusted and able lieutenants to kneel a crushing blow to the very cosmos of Bangladesh’s existence. Despite their brief political careers after our independence in 1971 and tragic deaths—or perhaps because of them—Bangabandhu and his deputies entered history through the front door: they became both a flag and a symbol. Each of them lived as a free man, and an independent thinker. Everything they wrote, said and did was the product of someone who knew their vocation to be that of liberators of bondages, and they represent for Bangladesh what Castro did for Cuba, Nasser for Egypt, Nkrumah for Ghana, Mao Tse-tung for China, and Lenin for Russia.

Their images were rehabilitated by the present regime and they were proclaimed national heroes and martyrs in Bangladesh’s history after more than two decades of military and quasi-military rules. 44 years are on. Late veteran

freedom fighter Md. Shafiqur Rahman used to say, “If I had one wish, it would be to bring the Satan Khondakar Mushtaq Ahmed back to the dock to inflict due punishment to him posthumously to make our majestic history aright and undo what were done by him and his cohorts.”  In this gripping story, we should take their accomplices into claustrophobic prisons to see where many of accused patiently awaited trials on charges of genocide in 1971. Mushtaq is no exception than the brutal murderous character in the guise of a human and he must be posthumously brought to justice for his grievous misdoings.

They are national icons in the history of Bangladesh; they were the preeminent leaders of Bengali nationalism in Pakistani-ruled Bangladesh standing beside Bangabandhu like a solid rock all along; and in fact, they were men of determination, charisma and conviction. It was a tremendous loss that occurred in the country in the wee hours 3rd November 1975 because they were all dynamic political leaders; towering and successful leaders of the state and the AL. They always wanted to achieve specific goals. They were men on the move. I am sure there is much more they could have achieved, but the country at large has lost very able and popular leaders of the masses.

The four national leaders’ fulminant or jerky demise is a great tragedy and the loss suffered by all in Bangladesh. Everyone was a fearless revolutionary and a disciplined lion. They had sharp and probing intellect in their field of actions. They were unable to complete the heavy task for our country; bullets and bayonet charges all spent, so sad we fell. But unless we smite the enemy, our bodies cannot rot in the field.  Yea, they will be born again and grasp the sword in their hands when ugly weeds cover this island. Our sole thought shall be the future of this splendid land. The bright sun is looking down upon earth and shines ever so brightly on our red hearts. I narrate a few lines of a poem:

“Could you imagine a pain so deep down inside

That it cannot be summarized in words you simply can write

You can't eat, you can't sleep, that is the pain that I am feeling...

Suddenly night crushed out the day and hurled,

Then fell stillness such as harks appalled,

When far-gone dead return upon the world.”

It is also found true in the words of Eduardo Galeano, "In the struggle of Good against Evil, it's always the people who get killed." But should we turn a blind eye to injustice, to betrayal, to murder, to abuse? No. That is exactly the point. There should be no blind eyes. And yet human justice stands with eyes covered, blind. With such blindness, we lose sight of our humanity. The restorative justice of criminals requires eyes that see, not only the victim, but also the so-called human being who is the perpetrator.

The four fallen heroes had personal ties with their people that had been severed by the cruel hand of death. But they are all bright humans in all respects. Deaths as occurred and everything is changed.  We are painfully aware that life can never be the same again, that yesterday is not over. Let us immortalise these patriotic leaders of our splendiferous chronicle who stood above others in character, attainment or reputation for our country and people by exceptional courage and nobility and strength.

We will trudge on, our eyes fixed on our thoughts, without seeing anything outside, without hearing any sound, alone, unknown, back bent, hands crossed, sad, and the day for us will be like the night. We will neither look upon the gold of nightfall, nor the sails from afar that descend on the country. And when we arrive, we will place on their grave a bouquet of green holly and heather in bloom.

We must wake up and seek sound reformation, before it is too late because those bright sons of this soil walk among us. And murder shall be no more; murder, thou shalt die. Tomorrow, at dawn, the moment the countryside whitens, we will leave. You see, we know that you await us. We will go through the forest; we will go across the mountain. We can no longer remain away from you.

Tears are welling up our eyes remembering those patriots of our history on this deplorable month. Because Voltaire said, “Tears are the silent language of grief.” Our devout homage is to four national leaders on this blackened month of November. Though difficult to sing, but let us sing chorus today. Let us all sing Bangladesh’s patriotic songs. My soul weeps and my heart bleeds, we seem to have lost our core creeds but we must restore them in full. I feel Bangladesh in every vein; the arteries pulsate with love as this country is so dear to me. I feel Bangladesh in every breath and the challenges the world paints. I see not but a beautiful Bangladesh. May their memories live on forever in our hearts!

The writer is a political commentator who writes on politics, political and human-centred figures, current and international affairs.