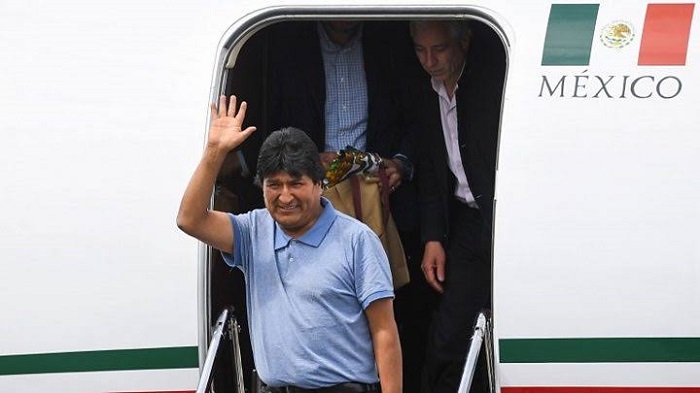 Former Bolivian President Evo Morales has arrived in Mexico City saying he asked for asylum because his life was in danger.

Morales resigned on Sunday after weeks of protests over a disputed presidential election result.

The Mexican jet carrying him landed at an airport in Mexico City, where he gave a brief news conference.

Morales said he was forced to stand down but did so willingly "so there would be no more bloodshed".

The left-wing leader said he and the Bolivian government were "very grateful" to Mexican President Andres Manuel Lopez Obrador, whom he credited with saving his life.

"While I have life I'll stay in politics, the fight continues. All the people of the world have the right to free themselves from discrimination and humiliation," he added.

Mexican Foreign Minister Marcelo Ebrard said Morales had arrived "safely" in the country, tweeting a picture of the jet that carried him.

The plane was denied access to Peruvian airspace, forcing it to make an unscheduled stop in Paraguay to refuel. It was then denied permission to return through Bolivian airspace and had to detour through other countries to reach Mexico.

Morales, a former coca farmer, was first elected in 2006.

He has won plaudits for fighting poverty and improving Bolivia's economy but drew controversy by defying constitutional limits to run for a fourth term in October's election. The poll is alleged to have been rife with irregularities.

What's the latest in Bolivia?

The deputy head of the Senate, Jeanine Áñez, has said she will take over as interim president until new elections are held.

The Senate met on Tuesday to fill the power vacuum, with lawmakers summoned to ratify Morales's resignation and appoint Ms Áñez as interim leader.

She said she was confident senators would vote to appoint her in order to "end this uncertainty, vandalism and instability that we have in the country".

But Ms Áñez's plans have been thrown into doubt by Morales's Movement for Socialism (MAS), which said it would boycott the vote.

As Morales prepared to leave for Mexico, unrest again erupted on the streets of the Bolivian administrative capital, La Paz, with angry supporters of the socialist leader clashing with security forces.

Bolivia's military commander ordered troops to support the police, who urged residents to stay indoors in a bid to quell the violence.

Morales had urged his supporters to resist the "dark powers" that had forced him to step down.

On Tuesday, Bolivia's main federation of unions warned it would hold an indefinite strike if the country's leaders did not restore constitutional order and peace within 24 hours.

Pressure had been growing on Morales since his narrow victory in last month's presidential election.

The result was called into question by the Organization of American States, a regional body, which had found "clear manipulation" and called for the result to be annulled.

In response, Morales agreed to hold fresh elections. But his main rival, Carlos Mesa - who came second in the vote - said Morales should not stand in any new vote.

The chief of the armed forces, Gen Williams Kaliman, then urged Morales to step down in the interests of peace and stability.

Announcing his resignation, Morales said he had taken the decision in order to stop fellow socialist leaders from being "harassed, persecuted and threatened". He also called his removal a "coup".