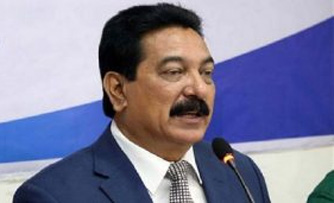 Jatiya Party Secretary General Mashiur Rahman Ranga on Tuesday faced fierce criticisms even by two senior MPs of his own party alongside others in the Jatiya Sangsad for his recent offensive remarks against slain pro-democracy activist Shaheed Noor Hossain.

They demanded Ranga apologise before the nation standing in Parliament for his insulting remarks against Noor Hossain, a young pro-democracy activist, sacrificed his life to end the autocratic regime of HM Ershad on November 10, 1987.

However, Ranga was not present in the House at that time.

Ranga at a discussion on Sunday said, “Who was Noor Hossain? An addict... a Yaba abuser, a Phensedyl abuser! Two democratic parties -- Awami League and BNP -- are overenthusiastic about him. This day is observed as Noor Hossain Day.”

Taking floor in the House, Jatiya Party MP Kazi Firoz Rashid said Ranga’s comments are not the stance of the Jatiya Party and. “It can’t be a political speech. It is his personal statement. Jatiya Party is ashamed of such remarks. We’re sorry and feel embarrassed about this,” he said.

Noting that Jatiya Party does not support his comments, Kazi Firoz Rashid said, “We don’t own what he said about Noor Hossain. Our party does not acknowledge it. We reject it with hatred.”

“We’ve complete respect to the brave youth who can sacrifice his life for democracy…. I never showed such audacity or utter such words like him (Ranga),”  Firoz said.

Another Jatiya Party Mujibul Haque Chunnu also said Jatiya Party does not own his comments and he will have to take its responsibility.

AL senior parliamentarian Tofail Ahmed said Ranga hurt the sentiment of the country’s people as he made insulting remarks on Noor Hossain. “We expressed hatred to his remark.”

Tofail said, “Ranga will have to apologise before the nation.”

AL senior parliamentarian Amir Hossain Amu said Ranga made the remarks to hide the misdeeds of HM Ershad. “Now actions should be taken against him. He’ll have to apologise.”