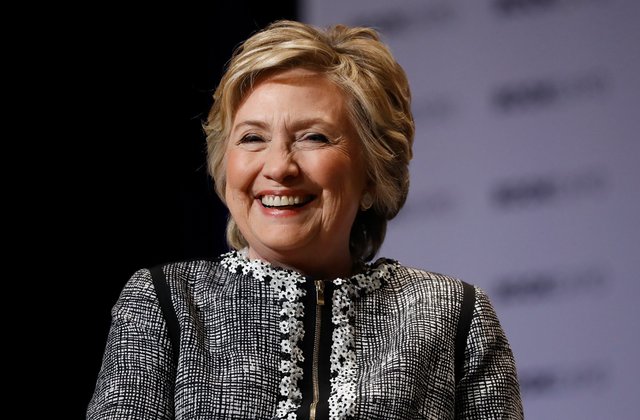 It is "inexplicable and shameful" that the UK government has not yet published a report on alleged Russian interference in British politics, Hillary Clinton has told the BBC.

The report has formal security clearance, but it will not be released until after the 12 December election.

"Every person who votes in this country deserves to see that report before your election happens," the former US presidential candidate said..

It includes allegations of espionage, subversion and interference in elections.

It contains evidence from UK intelligence services such as GCHQ, MI5 and MI6 concerning covert Russian attempts to influence the outcome of the 2016 EU referendum and 2017 general election.

The report was finalised in March and referred to No 10 on 17 October.

But approval for its publication has yet to be given - and is not due to happen until after polling day.

MPs on the intelligence committee have been highly critical of that outcome, but the government has said the timing is not unusual.

Speaking to BBC Radio 4's Today programme while in the UK on a book tour, Mrs Clinton said she was "dumbfounded" that the government would not release the report.

"That should be an absolute condition," she said.

"Because there is no doubt - we know it in our country, we have seen it in Europe, we have seen it here - that Russia in particular is determined to try to shape the politics of western democracies.

"Not to our benefit, but to theirs."

She also told BBC Radio 5 Live's Emma Barnett: "I find it inexplicable that your government will not release a government report about Russian influence. Inexplicable and shameful."

But Chief Secretary to the Treasury Rishi Sunak said the report had to be "properly processed" before being made public.

"The standard process for reports like this is that they have to go through an appropriate period of vetting, due to the sensitive nature of the information they contain," he said.

He said the report was received at the end of October and the vetting process could take several weeks.

"It's right that [reports like this are] properly processed to ensure our security and I think those processes are being followed," he added.

Hillary Clinton said the US had a similar problem in the 2016 election, when she was defeated as the Democrat's candidate for president by Republican Donald Trump.

Trump and his campaign, she said, were under investigation for their connections with Russia, Russian agents, and others promoting Russian interests. But the American public did not know before the election.

The Russians were still "in" her country's electoral system and "pumping out propaganda", Hillary Clinton said.

"So there's no doubt of the role that Russia played in our 2016 election and is continuing to play.

"I would hate to see that happen here. Whatever the outcome. I don't know what's in it, (the report) any more than anybody else does.

"But certainly, people who are about to vote in a month or so deserve to know what is in a report that one has to speculate, must have something of concern, otherwise why wouldn't it be publicly disclosed?"

Chancellor Sajid Javid has told the BBC the timescale for the publication of the report was "perfectly normal" because of the sensitive nature of the content.

However, Labour's shadow foreign secretary Emily Thornberry has said the decision not to clear the report for publication before Parliament closed ahead of the general election was "clearly politically motivated".

Speaking in the Commons last week, she suggested the report could lead to questions about links between Russia, Brexit and the Tory leadership, which could derail the Conservative election campaign.

Sources have told the BBC there was no objection from any other government agency or department to the report's publication - leaving the decision to release it with Downing Street.

In the US, the Mueller Inquiry laid out a broad pattern of interference in the US 2016 presidential election - particularly using social media and leaking of documents.

However it did not establish any criminal conspiracy between Moscow and the Trump campaign.

So far no evidence of a cyber campaign on a similar scale has been produced in the UK and government ministers have said there is no evidence of "successful" Russian interference in UK elections.

Hillary Clinton's comments came hours before the Labour Party reported a "sophisticated and large-scale cyber-attack" on its digital platforms.

A Labour source told the BBC "tens of millions of attacks - mostly originating from Russia and Brazil" had been detected.