Delhi finds its connectivity with Dhaka a ‘game-changer’ 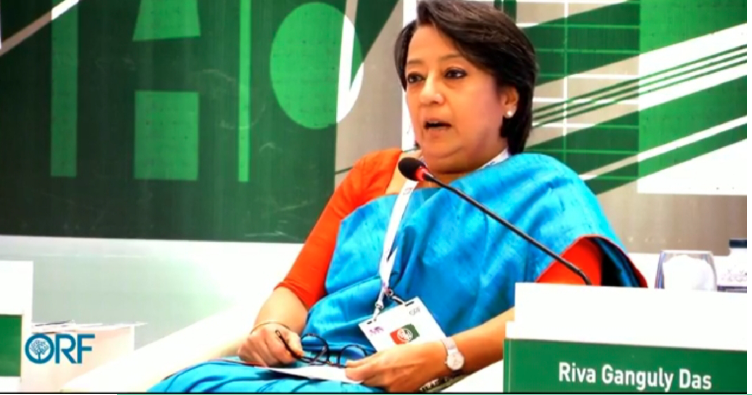 Indian High Commissioner to Bangladesh Riva Ganguly Das on Tuesday said India believes in an “inclusive” Indo Pacific and described its connectivity with Bangladesh as “game-changer” ensuring a “win-win” situation for the two countries.

“So, for India connectivity with Bangladesh is a game-changer and we feel that for the both of our countries it’s a win-win (situation),” she said while talking in an interactive session on ‘Connecting the Indo-Pacific: Infrastructure and Influence’ in the city.

The session was arranged as part of the ongoing three-day ‘Dhaka Global Dialogue 2019’ inaugurated by Prime Minister Sheikh Hasina on Monday.

The High Commissioner talked about the railway and roads widening projects which are happening under 8 billion Lines of Credit (LoCs) inland water-based connections and access to two Bangladesh ports – Chattogram and Monga.

The High Commissioner highlighted the joint initiatives of reestablishing all the pre-1965 rail connections between Bangladesh and India and progress made so far to that end.

She said Bangladesh is the most important neighbour of India with which they have such a “growing interaction” and connectivity plays a very important role in this interaction.

“The importance of connectivity can be judged by the excitement that is there in Indian in Northeastern States,” said the High Commissioner.

State Minister Shahriar said free movement of people, services and goods are the key elements for the region to prosper.

“We need to harness our potential and increase our cooperation,” he said adding that negative elements like irregular migration, illicit trade and piracy were there but there are success stories  in other parts of the world.

Shahriar said Bangladesh’s position on Indo Pacific is “loud and clear” and mentioned that other ideas or initiatives are complementary not conflicting.

He said the Indo Pacific is still evolving but one thing is evident that it is Asian century with global economic powers’ focus on it.

That is why, Shahriar said, the countries of this region need to remain in bonding and cooperation as much as possible.

“Potential is there. We must not lose our focus. We shouldn’t get confused by different ideas by different countries,” he said.

The State Minister said people prefer free movement and free movement of trade is also essential as it is important element for all the countries.

He laid emphasis on considering domestic demand, interest and objectives and also world order. “We need to talk about it much more.”

Riva Ganguly said she does not think Belt and Road Initiative (BRI) and Indo Pacific are the same at all and Indo Pacific is not driven by a single country with long portfolio projects in that sense.

She said Indo Pacific is an understanding what they believe a natural region.

Prof Minwang Lin suggested having a master plan for regional connectivity saying Bangladesh and India can take the lead to that end.

For India, High Commissioner Riva Ganguly said, the important thing of the Indo Pacific is that they are looking at a “free, open, inclusive” order which is “safe, secure and stable.”

She said they are looking at freedom of navigation, respect and sovereignty of all in the region. “It’s not a strategy; it’s not a club and not a grouping.”

Riva Ganguly said India believes in an inclusive Indo Pacific which is not exclusive in any way.

She said this inclusive idea shows the interest of the region those who are in the region, assurance of safe, secure architecture based on cooperation, international order, law, respect and adherence of the rule of law.

Issues related to Asean, Saarc and Bimstec were also discussed in the session with participation from the audience.

High Commissioner Riva Ganguly said the three words - Dhaka Global Dialogue - by itself indicative of how important this event is.

“We’re having a global dialogue in Dhaka it again shows the importance of Dhaka,” she said adding that it’s one of the most happening places in the world.

Talking about Bangladesh’s growth, the High Commissioner said this is a story which gets repeated – the growth of Bangladesh in which India sees a lot of opportunities. “Across all sectors, Bangladesh has done so amazingly well.”

Talking about Indian perspective of Indo Pacific, the Indian High Commissioner said India is a growing economy and one of the fastest-growing economies, and they naturally depend a lot on their sea lanes - most of the trade takes place through sea lanes, both merchandise and services trade.

Riva Ganguly said it is a natural region in their view which has growing importance in the region and beyond.

The High Commissioner said in terms of economic importance as well as geographical importance it is an important concept and area which is going to be increasingly more and more important.