Sterling suspended by England after 'disturbance' 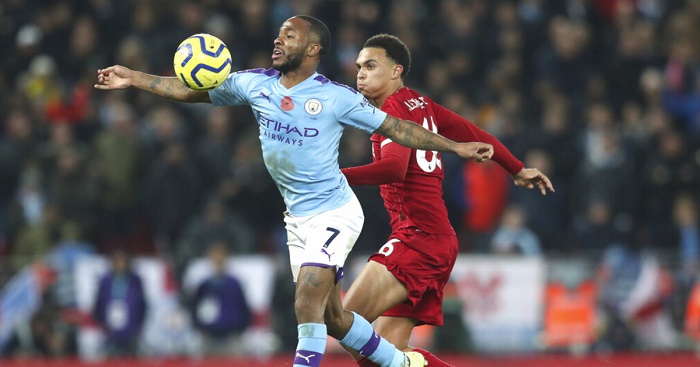 Raheem Sterling will not be considered for England's European Championship qualifier against Montenegro after emotions ran high when the team gathered on Monday following Manchester City's loss to Liverpool.

A day after the Premier League top-of-the-table match at Anfield, where Sterling clashed with Liverpool defender Joe Gomez near the end, both players apparently became involved in another exchange when the England squad convened at the national training center at Burton upon Trent.

The English Football Association was moved to say in a statement that Sterling will not be considered for the game on Thursday against Montenegro at Wembley "as a result of a disturbance in a private team area at St. George's Park today. He will remain with the squad."

England manager Gareth Southgate said it was the right call.

"One of the great challenges and strengths for us is that we've been able to separate club rivalries from the national team. Unfortunately the emotions of yesterday's game were still raw," Southgate said.

"My feeling is that the right thing for the team is the action we have taken. Now that the decision has been made with the agreement of the entire squad, it's important that we support the players and focus on Thursday night."

Sterling has been in exceptional form for England, scoring eight goals and providing five assists during Euro 2020 qualification. He will miss their last home qualifier for Euro 2020 and the chance to advance, plus the team's 1000th fixture.