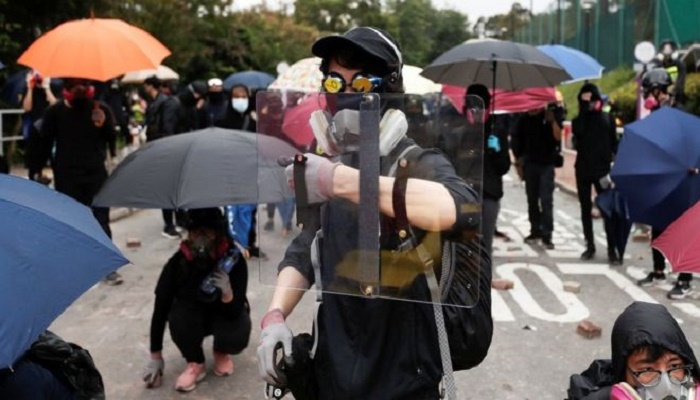 Some schools and universities in Hong Kong remain closed on Tuesday over safety fears as protesters called for a day of traffic disruptions.

Many of the territory's train lines are suspended or delayed as police search passengers and long queues form at stations, reports BBC.

On Monday, Hong Kong saw a marked escalation of violence.

One activist was shot with a live bullet by police while another man was set on fire by anti-government protesters. Both are in critical condition in hospital.

Dozens of local and international schools across Hong Kong said they would be closed on Tuesday with some telling parents on text message it was due to safety concerns given the ongoing protests.

The city's English Schools Foundation said that "due to our concern for the safety of our students and staff, all ESF classes are suspended today. Students should not travel to school".

Speaking on Tuesday morning, the city Chief Executive Carrie Lam said despite the unrest, there would be no blanket suspension of all schools.

Hong Kong is part of China but as a former British colony it has some autonomy and people have more rights.

The protests started in June against plans to allow extradition to the mainland - which many feared would undermine the city's freedoms.

The bill was withdrawn in September but demonstrations continued and now call for full democracy and an inquiry into police behaviour.

Clashes between police and activists have become increasingly violent and in October the city banned all face masks.