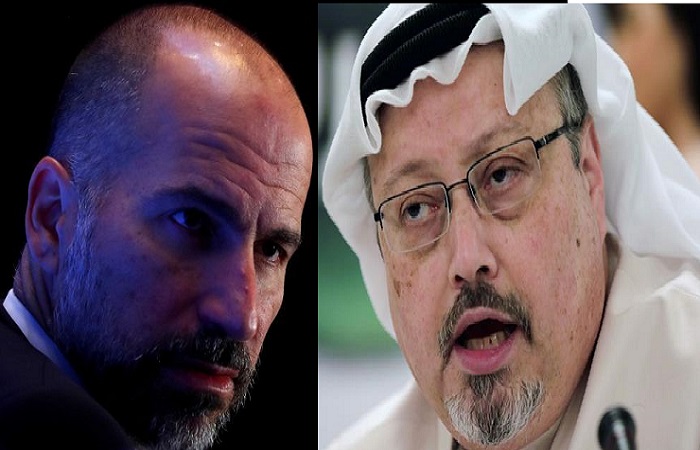 Uber CEO Dara Khosrowshahi has reportedly tried to clarify his description of journalist Jamal Khashoggi's murder as a "mistake" by the Saudi government.

Khosrowshahi made the original remarks in an interview with Axios, video of which was posted online.

"I think that government said that they made a mistake," he said when asked whether the head of the Saudi sovereign wealth fund, Yasir Al Rumayyan, should continue to sit on Uber's board. The Saudi fund is Uber's (UBER) fifth-largest shareholder, with 5.3% of the company.

Khosrowshahi compared Khashoggi's murder to Uber's troubles with self-driving cars, one of which killed a pedestrian in Arizona last year. The pedestrian was walking a bicycle across a road at night. Uber's self-driving software system initially classified the pedestrian as an unknown object, then as a vehicle, then as a bicycle, but never braked.

Officials ruled earlier this year that Uber would not face criminal charges. The company temporarily halted its vehicle testing program and shut down its self-driving operations in Arizona.

"We've made mistakes too, right, with self-driving, and we stopped driving and we're recovering from that mistake," Khosrowshahi said. "So I think that people make mistakes, it doesn't mean that they can never be forgiven. I think they [the Saudi government] have taken it seriously," he added.

Axios reported that the Uber chief subsequently called the publication to express regret over his comments and sent an emailed clarification.

"I said something in the moment that I do not believe," the statement read. "When it comes to Jamal Khashoggi, his murder was reprehensible and should not be forgotten or excused."

Uber did not immediately respond to a request for comment from CNN Business.

The CIA concluded that Saudi crown prince Mohammed bin Salman, the country's de facto ruler, personally ordered the death of Khashoggi, who disappeared a little over a year ago from the Saudi consulate in Istanbul.

A total of 11 people allegedly involved in the murder were charged last year by Saudi prosecutors. Saudi officials said five of them face the death penalty for being directly involved in "ordering and executing the crime." The United States has sanctioned 17 Saudi officials for their alleged involvement.

Bin Salman denied being personally involved in Khashoggi's death in a "60 Minutes" interview with CBS in September, but said he took responsibility for the death as a Saudi leader.