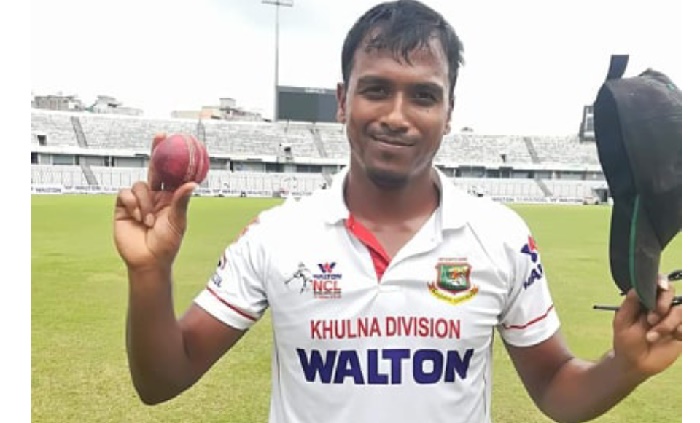 Right-arm national colored pacer Rubel Hossain of Khulna Division made his career-best bowling against Rajshahi Division in the 5th round match of the ongoing National Cricket League (NCL) at the Sher-e-Bangla National Cricket Stadium on Monday.

Rubel bagged seven wickets conceding 51 runs in 17.4 overs to surpass his previous best bowling figure of five wickets for 22 runs for the South Zone in Bangladesh Cricket League (BCL) in 2017.

Resuming the first innings with overnight total 36 for no loss in 12 overs, Rajshahi Division were bundled out cheaply for 151 in 50.4 overs against devastating bowling by Rubel Hossain on the 3rd day of the four-day 5th round NCL match on Monday.

Replying to Rajshahi Division first innings total 151 runs in 50.4 overs, Khulna Division opened the first innings and scored 154 for 4 in 54 overs to take a three-lead over Rajshahi with six wickets in hand.

Rajshahi Division batsmen were clueless to face the right-arm pacer Rubel, who took advantage of the cloudy weather of Mirpur, bagging the wicket of both Rajshahi openers and completed his record seven-wicket haul.

Sunzamul Islam and Mizanur Rahman were the best batsmen of Rajshahi Division scoring 48 and 43 runs respectively.

In the another NCL match at Shaheed Chandu Stadium in Bogra, Rangpur Division took overall 212-run lead over Dhaka Division on the 3rd day of the four-day league on Monday.

Resuming the first inningsat 195 for five, Dhaka tumbled for 222 all-out in 64.1 overs. Abdul Mazid (52) and Raqibul Hasan (67) hit the fifties but the remaining batsmen failed to come up with the big innings.

In reply, Rangpur Division, with first inning total 234 runs, opened the 2nd innings and scored 200 for 5 in 81 overs on day-3, featuring an unbeaten 104 runs by Nasir Hossain

Dhaka Metro took 205-run lead with six wickets in hand against Sylhet Division in the 5th-round of the league at the Shahid Kamruzzaman Stadium in Rajshahi on Monday.

Resuming the first innings with overnight total of 322/6 in 83 overs, Sylhet Division were all out for 351 runs in 101.3 overs with Amite Hasan making his maiden first-class century on debut scoring 125 runs.

In reply, Dhaka Metro scored 245 for 4 in 73 overs at the end of day-3. Azmir Ahmed and Marshall Ayub hit fifties. Azmir posted 80 while Marshall remained unbeaten on 73.

The day’s other Tier-2 league match between Barishal Division and Chattogram Division could start for the 3rd successive day at te Abdur Rab Serniabad Stadium in Barishal due to rain and wet outfield.