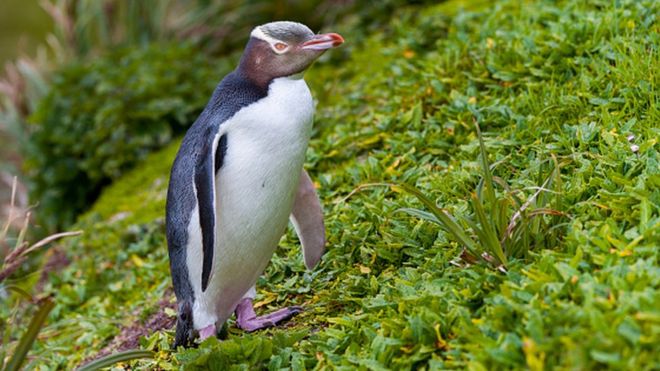 An endangered yellow-eyed penguin has won New Zealand's coveted Bird of the Year competition after two weeks of intense campaigning.

The hoiho saw off more than five rivals to become the first penguin to win the annual honour in its 14-year history.

With only 225 pairs left on New Zealand's mainland, the hoiho is said to be the rarest penguin in the world.

Experts say the hoiho is an anti-social bird that communicates with a high-pitched scream.

Forest & Bird, the conservation group that runs the poll, said the hoiho's victory over the kakapo and last year's winner, the kereru, was a "huge upset".

"It was so close between these amazing endangered birds, it was impossible to predict a winner for most of the competition," said Megan Hubscher, a spokeswoman for the group.

The penguin's bid attracted support from two mayors during a campaign marked by "memes and trash-talk", Ms Hubscher said.

Underlining the significance of the result, Prime Minister Jacinda Ardern congratulated the winner.

There are no reports of voting irregularities this year after fixing scandals marred previous polls.

Previous winners include the kereru, a type of wood pigeon, in 2018 and the kea, a species of large parrot, in 2017.

"Bird of the Year has become a national passion, and that's thanks to everyone relentlessly and ruthlessly promoting their favourite bird's weirdest qualities to the globe," Ms Hubscher said.

What kind of bird is it?

A tall, portly penguin with a pale yellow band of feathers on its head, the hoiho stands around 65cm (25in) tall and weighs around 5kg (11lb).

Although mostly silent, the birds do shriek in a high-pitched tone when they mate.

Experts fear the penguins are at risk of becoming extinct unless action is taken to conserve their habitat.

The top five were: