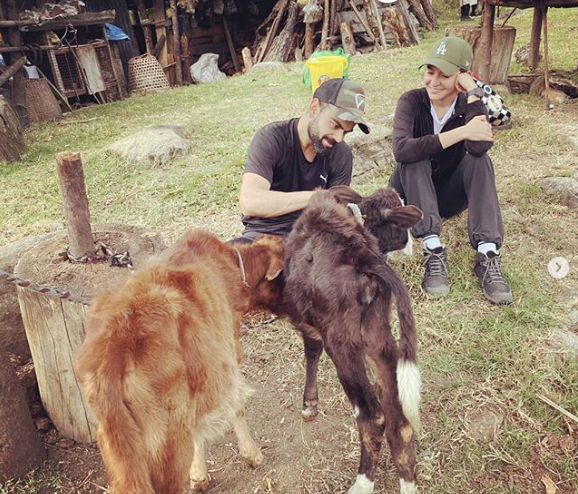 Anushka Sharma, who is still on a holiday in Bhutan with her cricketer husband Virat Kohli, is making our trip to her Instagram profile worthwhile by sharing adorable pictures from the trip. Anushka Sharma on Monday posted pictures from her trip, in which she and Virat can be seen caressing little calves and imbibing the best of what nature has to offer. "Love recognises love," Anushka Sharma captioned the post. Over the weekend, Anushka posted similar pictures from her trek in Bhutan, which were all cute. Anushka and Virat's trip to Bhutan started a few days before the latter's 31st birthday and it seems that the power couple is in no mood to end this holiday any time soon.

On Virat's birthday, Anushka shared pictures of them making a wish at one of the Buddhist monasteries and she wrote, "I hope you find the light guiding your path always and may you choose to do the right thing every time. Your compassion is what makes you a good leader and I pray that you always have that in abundance."

Before that, Anushka and Virat trended big time after the actresses post about their interaction with a local family, who had no idea about their celebrity status, went viral. Here's what Anushka Sharma posted.

Anushka Sharma was last seen in 2018 film Zero and she is currently on a break of sorts from films. However, Anushka Sharma is collaborating with Netflix India through her Clean Slate Films for two web-series and a film.