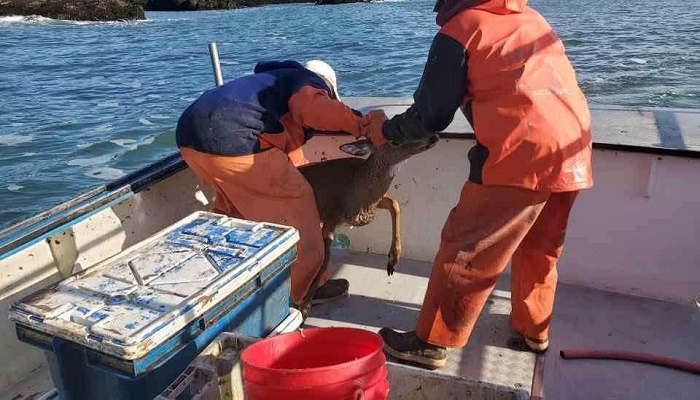 A group of fisherman had the most unusual catch for the day. Five miles off the US coast of Addison, Maine, Warren Dorr’s commercial fishing boat came across a deer that was almost drowning, reports Hindustan Times.

Dorr shared pictures of the rescue on Facebook saying, “Found this little guy 5 miles offshore today drifting farther away from land. Couldn’t let the poor guy suffer and drown so we brought him aboard and sailed him half hour to land and dropped him off on the beach! And sailed back out to haul!”

The deer who was seen far offshore was not an easy rescue for the fisherman. “We had to circle a few times to get a hold of him, they grabbed him by the spikes and maybe a leg or two and just dragged him in,” Jared Thaxter, a fellow fishermen told ABC News.

This spectacular act of humanity was highly appreciated by Facebook users. The post garnered almost 8,000 likes and 6,000 shares. People flooded the comments section of the post by sharing their reactions, many of whom wrote their faith in humanity was restored.