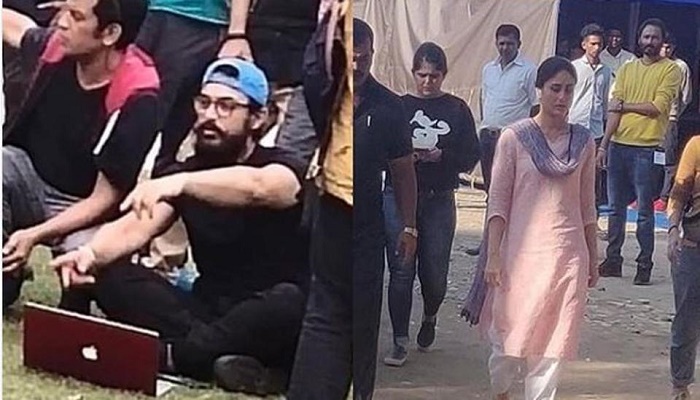 The leaked photos show Aamir discussing the plan with his team, while Kareena is seen walking around at the shoot location with her security.

Kareena is seen dressed in a pink kurta, a white salwar and some flip flops. She is also wearing a purple dupatta and looks rather plain and simple. This might also be her look for the film. Aamir, meanwhile, is in his casual clothes--a black t-shirt, a black pair of pants and a blue cap.

Aamir unveiled the logo of Laal Singh Chaddha earlier this week. The short clip had music composer Pritam’s soundtrack and showed a feather flying in the sky. He captioned the video: “who knows if the story is in us or if we are in a story.”

The film is an adaptation of Forrest Gump, Robert Zemeckis’ multiple Oscar-winning film which was released in 1994 and starred Tom Hanks with Robin Wright. Aamir will co-produce the Hindi adaptation along with Viacom18 Motion Pictures.

Aamir has lost 20 kilos to play the younger version of his character in the film. Also, this is the first time Kareena gave an audition for a film in her entire career.

Directed by Advait Chandan of Secret Superstar fame, and written by Atul Kulkarni, the film will release on Christmas 2020.