Mithila admits her relation with Fahmi 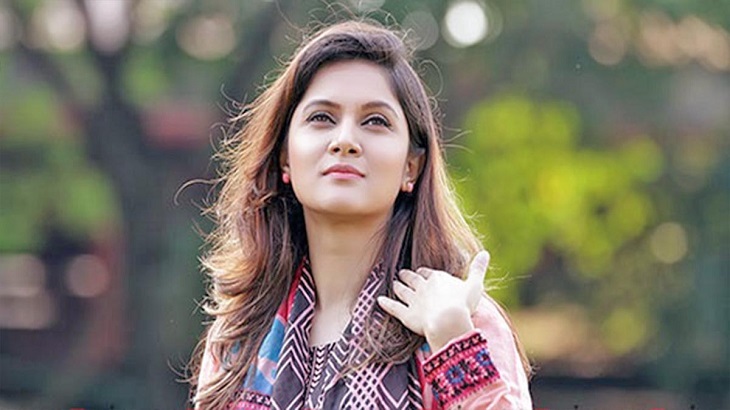 Violating the privacy of the stars, a total of 18 private pictures of Fahmi-Mithila published in social media and Mithila found herself in the eye of a storm of criticism in Bangladesh.

Though embarrassed Mithila kept mum over the issue for a while, she admitted the relation with Fahmi at last.

She posted a status on social media platform Facebook on Tuesday clarifying her stance on the issue.

She wrote: “So here I am, not explaining what has happened, but rather clarifying my stand on the recent social media drama about some of my private photos, some real, some fabricated, which have been made public vindictively to vilify my reputation by some criminals.

Those were my photos shared with my then boyfriend back in 2017/2018 when we were dating. His facebook profile got hacked when the perpetrators purposefully looked for contents to use them criminally. Here I want to emphasize on the word ‘dating' which means we were in a relationship. And we should not be so naive about the fact that when two people date they share intimate moments and photos, possibly through social media in this era of technology. And I do take the responsibility of not being able to protect my privacy.
However, I am not ashamed of my photos, of me being exposed; rather I am ashamed of the fact that some shallow people of my country took the liberty of posting, sharing and using my private moments, selling subscription and news out of it, at the cost of vilifying my reputation and image, raping me virtually. I am ashamed that the media, particularly some news portals have published this news without my consent and quoting me when I have never spoken or given any statement to them. I feel ashamed and enraged the same way I feel rage when I see women getting sexually violated on the streets, at home, in the virtual space, everywhere.
My stand here is this: I strongly believe that my honour and dignity do not lie in my body or my undergarments or in my private photos. All I have achieved in my life is through my hard work, creativity and education which do not go in vein because some criminals have victimized me stealing and negatively using my private moments from the past.

I took a break for the past 24 hours to stay calm and focus on my positive energy so that I can come back stronger. This situation does not make me vulnerable; this makes me stronger than ever.

I have launched formal complaints in the cyber crime department, I have informed the authorities and I am in the process of filing a case under the ICT act. I will identify those perpetrators with the help of the authorities who have victimized me, I promise. I will fight for me, for all the people being victimized by the hackers and cyber predators. I thank my family, my friends and colleagues who are with me in this situation.

P.S. I will only share my statement/updates on the legal proceedings etc. on my facebook profile. I have not given any statement to any newspaper in Bangladesh or elsewhere. News portals creating fabricated news or any update without my consent will be brought under the legal process.”

According to media reports, Rafiath Rashid Mithila, former wife of singer Tahsan, was in an affair with Srijit Mukherji, a director from Kolkata. Over six months, their relationships were buzzing in the Tollywood and Dhallywood. It was even heard that they will get married soon!

Speaking about the trauma that Mithila is going through, director Srijit Mukherji said, “It is a criminal act and a gross violation of privacy. Whoever has done it needs to be put behind bars. The way Mithila has handled the situation is exemplary. I think her statement on Facebook is brilliant and to the point. It makes me all the more proud of her.”