Bangladesh draw 1-1 with Jordan in AFC U-19 Qualifiers 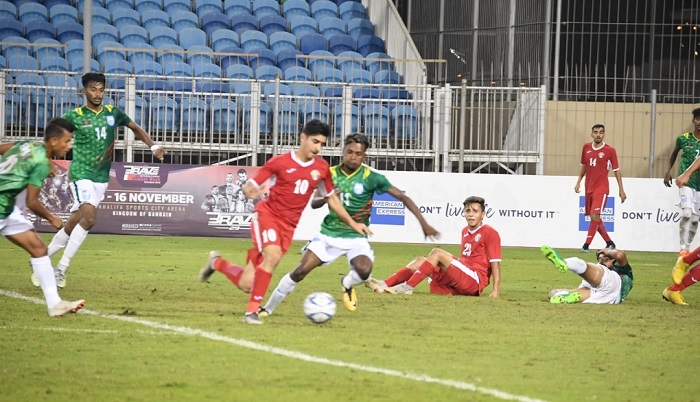 Bangladesh Under-19 men’s football shared a point with Jordan after battling to a 1-1 draw in their second group match of AFC U-19 Championship 2020 Qualifiers at the Khalifa Sports City Stadium in Manama on Friday.

Bangladeshi booters made several good attempts against Jordan from the beginning.

Despite maintaining a compact defensive approach, Bangladesh conceded a goal in just a few seconds before the half-time.

Afaneh scored a stoppage-time penalty (46th minute) to give his side a 1-0 lead.

Bangladesh started to play attacking football in the 2nd half and finally had a breakthrough in the 74th minute when Arafat scored with a header off a long throw-in by defender Kazi Rahad Mia (1-1).

Maraz Hossain of Bangladesh and Mahmud Abu Taha of Jordan got yellow cards in the match.

Bangladesh, placed in Group E with Jordan, Bhutan and hosts Bahrain, will play the last match against Bhutan on November 10 at the same venue.