All those joined AL from other parties not intruders: Quader 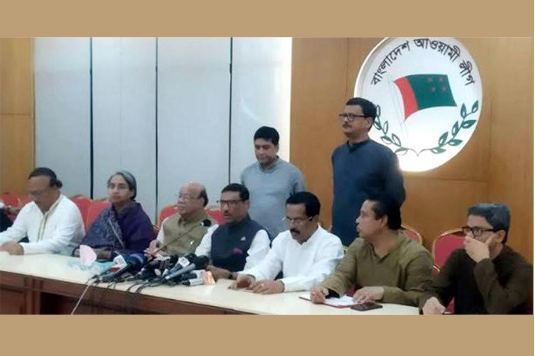 Awami League (AL) General Secretary Obaidul Quader said all of those who joined the AL from other parties are not intruders rather the wrongdoers are infiltrators.

“All of those who joined our party are not intruders if there is no allegation of wrongdoings or link with communalism against them, they’re not infiltrators,” he told reporters after a meeting with the party’s joint general secretaries and organizing secretaries at the AL central office at Bangabandhu Avenue.

Quader, also the road transport and bridges minister, said many persons having a clean image joined the AL and they are not intruders.

He reiterated that the wrongdoers and those who have links with communal forces will not be placed in the fresh committees of the AL.

Replying to a question about resignation of seniors leaders of BNP, the AL general secretary said it is the outcome of BNP’s negative politics.

At the outset of the meeting, Quader said councils of expired committees of district, upazila, city, thana and ward levels of the party are being held across the country ahead of AL’s national council slated for December 20-21.

He urged the local leaders and workers to refrain from doing ill competition inside the party.

All bitterness inside the party will be removed from the party ahead of its national council, he added.

Speaking on the occasion, AL Presidium Member Mohammed Nasim said councils of different organization units in Rajshahi district will be held ahead of the national council.

Motioning AL as one the oldest political parties in the country, Nasim said it is the only organization which timely holds its triennial national council if there is no problem. He expressed his optimism that under the leadership of Awami League President and Prime Minister Sheikh Hasina, the party would hold its national council in a befitting manner and form a strong committee to start a new journey.