Muhammad Mudassar set to be the tallest cricketer 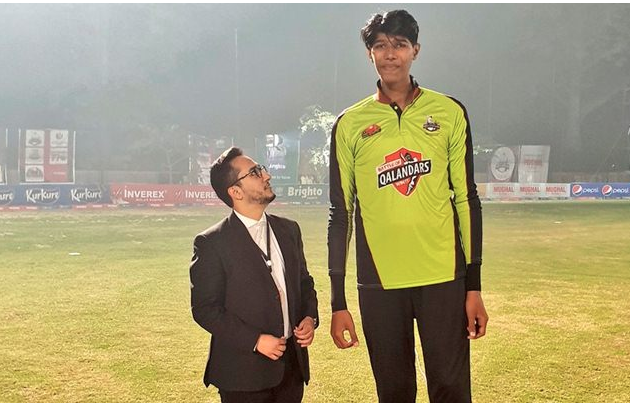 The Pakistani cricket team is currently on the tour of Australia where they are locking horns against a rampaging Aussie unit. The Men in Green- the current No.1 ranked Twenty20 Internationals- ushered in a new era under the leadership of Babar Azam.

Following their 0-3 defeat at the hands of Sri Lanka, one that sent shockwaves across Pakistan, a few changes were made to the set-up. While youngsters like Muhammad Musa, Mohammad Hasnain were blooded in the system, experienced campaigner, Mohammad Irfan, who had done really well in franchise T20 tournaments during his time out from the national side, was brought back in the team for the series against Australia.

The common talking point every time Irfan’s name comes into the discussion is his Brobdingnagian size. The guy cuts a humongous seven feet and one inch and is comfortably the tallest cricketer to ever play the game. But, unfortunately for Irfan, even that record is threatening to be broken by a 21-year-old, 7’5″ sized figure- the latest recruit of the Pakistan Super League franchise Lahore Qalandars- Muhammad Mudassar.

The 21-year-old stand garnered eyeballs during his exploits at the finals of the ‘Battle of Qalandars’. The precocious talent will be training at the Lahore Qalandars high-performance center where his skills will be honed. Mudassar hails from a very humble background from Lahore.

With him cutting across such a big frame, Mudassar has his own advantages and limitations. For example, he finds picking up shoes an extremely arduous ordeal of his daily routine, and is hopeful that his super-tall frame will not create hindrance in his International career.

Speaking of his compatriot, Mohammad Irfan endured a forgettable start to his comeback trail with Australian skipper teeing into the super-tall fast bowler. Irfan conceded 26 runs in one over but redeemed himself a bit in the next game where he conceded 1-27 in an eventual seven-wicket loss for Pakistan.